The United States of Hogs, or Why Missourians Are Pukes 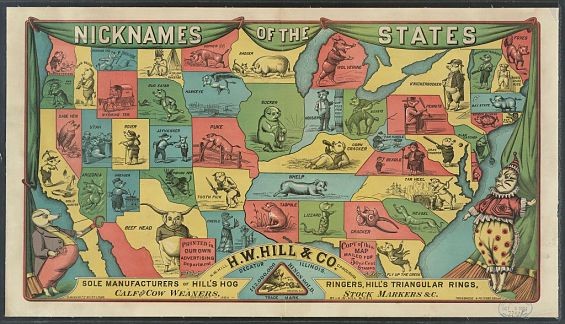 Even back in 1884, before college football was the widespread money-making machine it was today, the names of many of your favorite teams already existed. In that blessed year, H.W. Hill & Co. of Decatur, Illinois, the sole manufacturer of Hill's Hog Ringers (142,000,000 rings sold!) drew up a map of these United States and territories with all the state nicknames, each lovingly illustrated with a little pig. (Well, the Texas pig ain't so little.)

There you have buckeyes and badgers and wolverines, jayhawkers and hawkeyes and even hoosiers -- though in the Indiana sense.

And then there are the Illinois sucker and the Missouri puke. WTF?

Read on, fellow pukes and/or suckers. All shall be explained!

Through the magic of the Internet, we managed to find an 1854 volume called History of Illinois From Its Commencement as a State in 1818 to 1857, penned by "the late Gov. Thomas Ford" which promised a "full account of the Black Hawk War, the rise, progress and fall of Mormonism, the Alton and Lovejoy riots and other important and interesting events."

It also explains the origin of the nicknames "pukes" and "suckers."

First the suckers. Back in the late 1820s, migrant workers from southern Illinois began traveling up the Mississippi River in the spring to work in the Galena lead mines and then back down the river to their homes in the fall. This, the late Gov. Ford noted, mirrored the migratory patterns of "the fishy tribe called 'Suckers.'"

But there's another, less charitable though more interesting explanation. A "sucker" is a sprout off the main stem of a tobacco plant that sucks off nutrients and has to be plucked off so that the plant will thrive. The southern part of Illinois, the late Gov. Ford explained, was originally settled by poor Southerners who "were asserted to be a burthen upon the people of wealth; and when they removed to Illinois, they were supposed to have stripped themselves off from the stem of the tobacco plant, and gone away to perish like the stem of the tobacco plant."

As it happened, the Galena mines were full of workers from Missouri, too, and they didn't get along very well with the miners from southern Illinois. "Analogies always abound with those who wish to be sarcastic," the late Gov. helpfully notes, and so the Missourians started calling the southern Illinoisans "suckers." Think of it as a precursor to "hoosier."

In retaliation, the suckers started calling the hated Missourians "pukes" because...well, let's let the late Gov. explain because he does a far better job than we can.

It had been observed that the lower lead mines in Missouri had sent up to the Galena country whole hoards of uncouth ruffians, from which it was inferred that Missouri had taken a "Puke," and had vomited forth to the upper lead mines, all her worse population. From thenceforth, the Missourians were called "Pukes;" and by these names of "Suckers" and "Pukes," the Illinoians and Missourians are likely to be called, amongst the vulgar, forever.

Sadly, when the time came to copyright their slogans, Illinois and Missouri went with the less-colorful Land of Lincoln and Show-Me State (though some of the legends around the Show-Me State nickname still aren't especially complimentary toward Missourians), and apparently "Suckers" and "Pukes" were too vulgar for college football. The illustration of the puking Missouri pig is still charming, though.

Animals Apropos of Nothing History