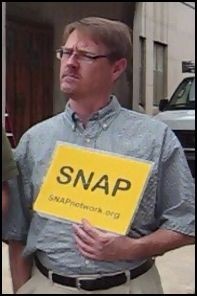 Recently in both Kansas City and St. Louis, lawyers defending the Catholic Church against clerical sex abuse allegations have have tried to subpoena years worth of emails and records from their long-time adversary, SNAP (Survivors Network of those Abused by Priests).

SNAP director David Clohessy often impugns the Church for failing to deal transparently with clerical sex abuse. Is it hypocritical for him to balk at releasing his group's correspondence with victims, journalists and others?


Clohessy never tires of lecturing the Catholic Church on the need for transparency, yet when he is in the hot seat, he rebels.

Daily RFT asked Clohessy by e-mail for his reaction.

He roundly rejects any moral equivalence. Here's what he wrote to us:

Who benefits when the private e mails of a struggling teenager, who was sexually assaulted for years by her priest, are given to Archbishop Carlson and his lawyers? That's not "transparency." That's a travesty. That's brutality. That's betrayal.

Men who beat their spouses, rape adults and assault kids would love to force 'transparency' on their helpless victims. They'd love to get records of what their victims told counselors or where they took refused or what they said in support groups. But does anyone really think that's how our society should function?

Archbishop Carlson is desperately trying to protect the reputations of his top staffers who knowingly and deceitfully put an admitted child predator back in a parish where he again sexually violated another child. Is there a more heinous offense than deliberately putting kids in the path of a predator with no waring to their parents? So of course Carlson will do anything possible to shift blame and attention elsewhere, even if it means going after a non-profit self help group and a hurting teenaged girl.

Our position isn't hypocrisy. It's common sense. It's the long-standing and well-established practice of rape crisis centers and domestic violence shelters and counselors and cops and everyone who cares about safeguarding the vulnerable from the violent.

We put convicted sex offenders' names on state websites. We don't put their victims' names out there.

Clohessy's view notwithstanding, it should be pointed out that the Church does have a right to defend itself, and subpoenas are often issued in broad terms, then narrowed down later.

So the extent to which SNAP will have to respond to the Church's subpoena in the St. Louis case is not yet clear.