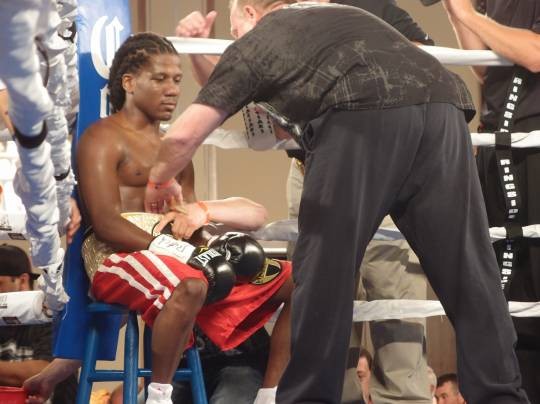 "Dangerous" Dannie Williams beat veteran boxer Fernando Trejo (33-17-6) on Friday night. He controlled every round, landing sharp hooks and straights between solid body work, before the fight was stopped because of an elbow injury Trejo sustained. The victory officially goes down as a knockout, Williams' 17th, and improves his record to 21-1. The fight, held in Key West, Florida, took place on the untelevised portion of the ESPN's Friday Night Fights card. It is Williams' ninth straight win since losing a unanimous decision to Eloy Perez in September 2009. Through that stretch, the St. Louis native has rattled off seven knockouts, albeit against opponents with a combined record of 126-85-16.

Williams and his Rumble Time Productions management team are hoping his next fight erases any doubt over his growing hype in the light heavyweight class. They are currently working to cement a March bout against North American Boxing Federation title holder "Hammerin'" Hank Lundy, a 21-1 Philadelphia fighter coming off an August knock out of David Diaz.

In the meantime, the two camps have engaged in some verbal sparring.

"I know Lundy's going to try and use his speed, but I can box with him, and I hit extra hard," Williams told Sports Page Magazine late last month. "I hurt guys I fight. Lundy can talk all he wants but that's going to happen to him, too."

"Dannie Williams can talk the talk, but has he walked the walk? Who has he fought?" Lundy's promoter Jimmy Burchfield said to Boxing Scene. "Talk is cheap. Right now Hank is the most targeted fighter in the lightweight division. He's the fighter television networks want. There are several options for a title defense, and you're at the bottom of the totem pole."