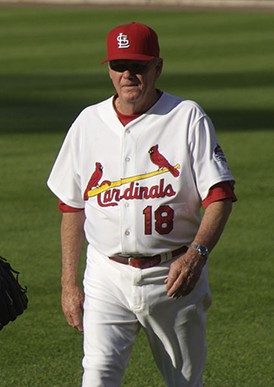 According to multiple reports from, one would assume, multiple sources, it appears Dave Duncan is stepping down from his post as the Cardinals pitching coach. When the team makes the official announcement it will mark the end of what is the longest current tenure in all of baseball, one which began back in 1995 when Duncan followed Tony La Russa here from Oakland.
This is surprising in one way, but not in another. It's surprising in that I don't think anyone was expecting Duncan to step aside at this time; this comes pretty much completely out of the blue. On the other hand, I was a little surprised Duncan didn't take the opportunity to step aside when La Russa announced his retirement. Duncan's wife Jeanne has been fighting brain cancer for quite some time now, and I honestly thought Duncan would make the 2011 season his last regardless of what La Russa himself did.
It appears Duncan will stay on with the organization in some capacity, likely in an advisory role. Whatever the case may be, I'm sure I speak for everyone here at the RFT in wishing Mr. Duncan and his family all the best. It sucks to see a man end his career like this, but there are also more important things than the job. Duncan clearly understands that.
It seems a little crass to worry about what the team will do in a case like this, but I get paid to write about sports and so that's what I'm going to do.
As for what Duncan's departure means for the Cardinals, make no mistake: this is bad news. Not devastating news, necessarily, but still quite bad. There are times when I feel Duncan gets far too much credit -- and too little blame -- for the performance of Cardinal pitchers, but the fact remains the man has been one of the most influential pitching minds in the game for better than three decades now.
When Mike Matheny was hired, I had very little concern about his lack of experience. Sure, he had never managed at any level of the game, but he had the respect of the players, he was known as a thoughtful, cerebral leader when he played, and he was inheriting a staff with a ton of continuity and experience. Mark McGwire and Dave Duncan could each take care of their respective sides of the ball, leaving Matheny to learn the job of managing a roomful of big, rich egos. Throw at least part of that out the window now.
I don't know Matheny will be forced to take on too very much more responsibility as far as the pitching staff goes, necessarily -- I'm fairly confident Derek Lilliquist can handle the staff as much as need be -- but the steadying, knowledgeable hand of a Dave Duncan isn't easy to replace. A huge amount of the continuity in the Cards' dugout just went out the window, and I have to admit it worries me.