For Sale: Bonnie and Clyde's Guns 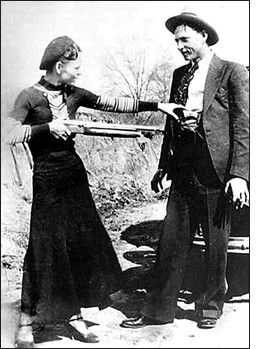 Ever wanted to own a set of guns that belonged to two celebrated Depression-era outlaws? Well, now's your chance! A tommy gun and 12-gauge 1897 Winchester shotgun seized when police raided Clyde Barrow and Bonnie Parker's Joplin apartment in April of 1933 will be up for auction later this month in Kansas City.

One of the police officers who had participated in the raid presented the guns to Mark Lairmore, a Tulsa police detective. The guns remained in the Lairmore family who, until recently, had lent them to the Springfield Police Museum, where they remained on display.

"They were the major draw of the museum, and I don't think they were all that anxious to give them up," Lairmore's great-grandson, also named Mark Lairmore, said in a statement. "But my father and grandfather have also passed away, so the sentimental reasons to hold them are no longer there.I feel it's time for someone with an appreciation of antique guns and the history behind these guns to own them and care for them."

The auction will take place at 10 a.m. on Saturday, January 21, at Mayo Auction and Realty in Kansas City. Robert Mayo, the owner of the auction house, told the Joplin Globe that he intends to let the bidders determine the value of the guns but that he expects them to bring in several thousand dollars. Remote bids will be accepted. And, yes, if you buy the tommy gun, which is fully automatic, you will have to register it with the Bureau of Alcohol, Tobacco, Firearms and Explosives. 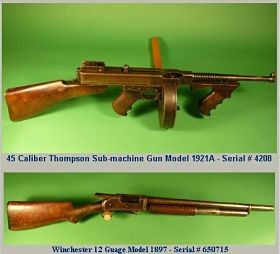 Bonnie and Clyde became infamous for their spectacular crime spree that lasted from 1932 until 1934, encompassed thirteen murders and many more robberies and ranged from New Mexico to Michigan, though they wreaked most of their havoc in Texas and Oklahoma. They escaped the Joplin raid and were finally gunned down a year later near Sailes, Louisiana. Their adventures were later made into a movie starring Faye Dunaway and Warren Beatty. Owning the guns will probably not make you as beautiful as these two stars, but you could probably buy reasonable facsimiles of their fabulous hats.

Historians believe that Bonnie and Clyde stole the tommy gun in Ohio and used it in a shootout with a bank teller in Oronogo, Missouri, near Joplin. It was the first time anyone used an automatic weapon in a robbery in those parts. The outlaws made off with $110. Hey, it was the Depression.

Sadly, the provenance and history of the shotgun is unknown.