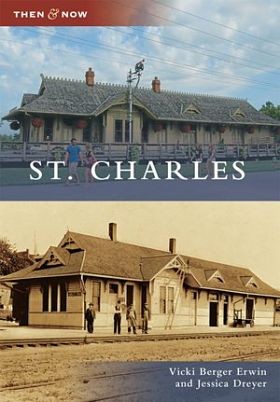 Amanda Doyle's Finally, A Locally Produced Guidebook to St. Louis by and for St. Louisans, Neighborhood by Neighborhood continued its reign at the top of the local bestseller list during the last week before Christmas, joined by some of the usual suspects (Steve Jobs, 11/22/63, Go the Fuck to Sleep), but they had some stiff competition in newcomer How to Poo at Work by Mats and Enzo, which debuted at number nine. We'd venture to say that this should stay on the list into the new year. If our expense account would allow it, we'd even buy a copy for the RFT office, we think it's that useful.

Returning to the list after a few months' hiatus are two more local titles, Noir at the Bar edited by Jedidiah Ayres and Scott Phillips, a collection of short stories from the reading series sponsored by Subterranean Books, and St. Charles (Then & Now) by Main Street Books owner Vicki Berger Erwin and Jessica Dreyer. Last year Erwin told Riverfront Times that she started writing the book because so many of her customers were asking for an architectural history of St. Charles and none existed. Now that's service!

1. Finally, A Locally Produced Guidebook to St. Louis by and for St. Louisans, Neighborhood by Neighborhood by Amanda Doyle with Kerri Bonasch 2. Steve Jobs by Walter Isaacson 3. Death Comes to Pemberley by P.D. James 4. Go the Fuck to Sleep by Adam Mansbach and Ricardo Cortés 5. The Night Circus by Erin Morgenstern 6. 11/22/63 by Stephen King 7. Goodnight iPad by Ann Droyd 8. Noir at the Bar edited by Jedidiah Ayres and Scott Phillips 9. How to Poo at Work by Mats and Enzo 10. St. Charles (Then & Now) by Vicki Berger Erwin and Jessica Dreyer

1. The Hunger Games by Suzanne Collins 2. Diary of a Wimpy Kid 6: Cabin Fever by Jeff Kinney 3. Catching Fire by Suzanne Collins 4. The Invention of Hugo Cabret by Brian Selznick 5. I Want My Hat Back by Jon Klassen 6. Onward Is Best: A Christmas Journey by Sarah Linquist 7. Remarkable Animals: 1000 Amazing Amalgamations by Tony Meeuwissen 8. Turtle in Paradise by Jennifer L. Holm 9. Inheritance by Christopher Paolini 10. Olivia and the Christmas Present by Farrah McDoogle and Shane L. Johnson