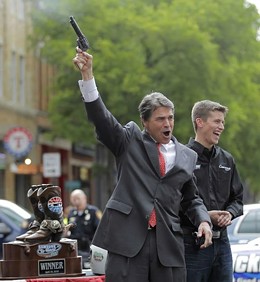 Ignoring the exhortations of St. Louis' Finest, some St. Louisans clearly did pop off some hot ones when 2011 turned to 2012.

Nevermind that "what goes up must come down." When we feel like celebratin' with random sprays of gunfire, dammit, we gonna. If GOP presidential candidate Rick Perry can do it, why can't we?

One gentleman recorded some of the action and uploaded it to YouTube. You can't see anything in the video, but you can sure hear it.  And here's the dude's comment:


This is what we do in America on New Years. Sounds like a city being invaded. Yes, some of those shots were from me.

Git some! (But hey, maybe try not to kill peoples, please).