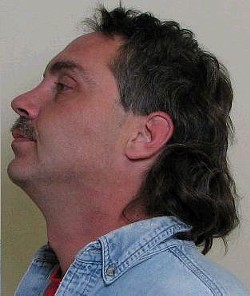 How did you spend Christmas Eve? Was it a "Silent Night" or a rip-roarin' drunken escapade like the one celebrated by Stephen Bolin of Staunton, Illinois?

The Madison County sheriff's department reports that it received a call around 6:41 p.m. December 24 notifying officers that the 41-year-old Bolin caused a disturbance at the Hill Tavern and crashed his car into a ditch while leaving the establishment. Deputies and police arrived a short time later, only to find Bolin "driving by the business at a high rate of speed."

When the law officers attempted to pull over Bolin, they say he instead swerved into their car. The impact of the collision sent Bolin's vehicle careening into the ditch once more. And once again, he'd escape. This time by gunning the engine and ramming into a squad car before vanishing down the road.

Deputies arrested Bolin a few minutes later at his Staunton residence. His smashed up car was found abandoned a few blocks away. Besides being drunk behind the wheel, fleeing police and ignoring stop signs, police say Bolin had no motor vehicle insurance and lacked proper registration. Bail was set at $25,000.