Mizzou Ready for SEC in Rout of Tar Heels 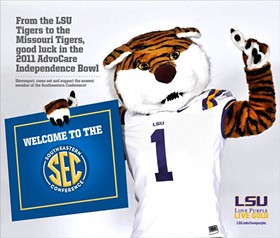 I really thought the Independence Bowl held a tough matchup for Mizzou. North Carolina had talent to burn, not to mention one of the stoutest run defenses in all of college football. I thought there was a very good chance the game was going to come down to James Franklin being forced to try and throw the ball to win a close game, and I could easily see such a situation coming unglued for the Tigers in a hurry.
Instead of pitting a stonewall run defense against the Tigers' spread ground attack, though, the Independence Bowl really served as a coming out party of sorts for Missouri quarterback James Franklin.
It also served as a jumping-off point for the national sports media to begin the narrative about Mizzou moving to the SEC next year and what, if any, impact Franklin himself may have on the team's immediate fortunes.
If last night was really any indication, the Tigers and their quarterback should be just fine.
While Franklin will certainly grab all the headlines -- and deservedly so -- the real heroes of this game were the men making room for him to run through. The Mizzou offensive line absolutely manhandled the North Carolina defense, a defense which features some of the brightest talent in all of college football. Quinton Coples is the best known of the group, a defensive end projected to go in the top half of the first round in this year's draft, but he's far from the only NFL-level talent Butch Davis managed to bring in before he was shown the door.
On the night the Tigers rolled up 337 total yards on the ground. Franklin called his own number 18 times for 142 yards, Kendial Lawrence went over 100 yards (108, to be exact), on 16 carries, and De'Vion Moore kicked in 59 yards on just 10 carries. Franklin ran for a pair of touchdowns and Lawrence added one of his own. It was, to put it lightly, a rather impressive show of force. And all without the Tigers' top running back, Henry Josey, aka the Big XII's leading rusher.
Franklin wasn't limited to running plays only, by any means; he threw for another 132 yards and a touchdown. His only real miscue came on an interception shown on replay to have been caused by a defender hitting Franklin's arm as he released the ball. On the Tigers' first drive of the night, Franklin completed a pass over the middle to L'Damian Washington (native of Shreveport, Louisiana, in fact, enjoying a very nice homecoming game), down to the two yard line that I honestly think may have been the single best throw the Mizzou quarterback made all year. I've often talked about my concerns over Franklin's arm strength and his ability to throw into tight coverage windows; the pass to Washington was absolutely perfect. Perfect velocity, perfect timing, perfect location.
The more I've watched Franklin this season, the more his game resembles that of Tim Tebow. I made the comparison all the way back in September, and I feel more and more as time goes on it was a good comp. Franklin is a couple inches shorter than Tebow -- and doesn't come with nearly as much of the baggage -- but otherwise his physical skillset and style of play are a remarkably good match. Let's just hope Franklin can lead the Tigers to the same kind of heights Tebow did Florida.
Mizzou let up off the gas a bit in the second half, allowing North Carolina's talented quarterback Bryn Renner to pull the Tar Heels back into the game a bit. Bottom line, though, is what I thought would be a great matchup and a tough test for the Tigers looked more like a mismatch by the time the first half came to a close.
Really, the only disappointment on the night was the painfully small crowd in Shreveport, thanks in large part to some awful weather. Even with the climatic difficulties, I still thought the game would be better attended. It was Missouri's first real chance to make an impression in SEC territory, and to see such a small turnout was a little disheartening. The chants of, "S-E-C, S-E-C," from the Tiger fans toward the end were nice, but still, as first impressions go it wasn't a sterling showing of Mizzou's drawing power.
Then again, considering the impression the Tigers made on the field, the size of the crowd probably didn't make a bit of difference. James Franklin and his teammates said all that needed to be said about what kind of team they'll be bringing to their new conference next season.