Misplaced your Christmas cheer? Hop in the car and head to St. Louis Hills after sundown, because the denizens of the south city neighborhood have plenty to go around.

Every November to December, the 6500 block transforms into Candy Cane Lane and plays host to thousands of carloads of St. Louisans flocking to see the twinkling lights. It's sort of the perfect set-up: Buy your Douglas fir at Ted Drewes a block-and-a-half away, and then join the snaking line of idling motorists waiting their turn to marinate in the artificial glow of mass-produced Christmas wonder.

"On Friday it's bumper-to-bumper traffic from nightfall until about 10:30 at night," says Sean McCaffrey, a resident of Murdoch, er, Candy Cane Lane, for four years. 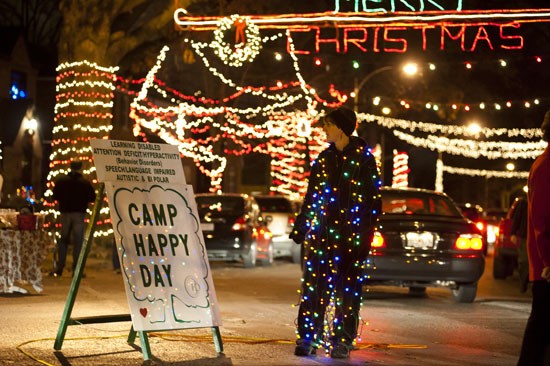 McCaffrey says it's expected that if you live on the street, you decorate your house for Christmas. This year only two homeowners on the block are playing the role of Scrooge, their darkened houses standing out like shuttered casinos on the Las Vegas strip.

McCaffrey said the folks driving through started making donations of their own volition, and the neighbors decided to collect it for charities like Stray Rescue and St. Vincent DePaul. On a recent weekend, they collected $2,200 for Salvation Army in four hours.

This year the 6500 blocks of Loran and the 6500 block of Neosho also won lighting awards from the St. Louis Hills neighborhood association. Though if Neosho and Loran want to take the top spot next year, McCaffrey say they'll have to put in the man hours.

"If you drive down those streets, there's no one there," he says. "On a weekend night, we always have entertainment and people around."

McCaffrey credits his neighbor Bob Klasek for organizing the block. Klasek was responsible for getting the street on board about 10 years ago, and they've been plugging in ever since.

But even before the creation of Candy Cane Lane, St. Louis Hills always enjoyed a rich holiday tradition, says Rosemary Spitler. She moved to the neighborhood in 1975 but remembers visiting it some 60 years ago to see the sights.

"It was a tradition just among friends," she says. "Once we were able to drive we'd come to look at the lights. This was always the place to go to look at Christmas lights, St. Louis Hills."