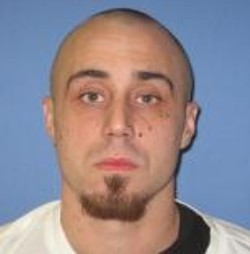 Bradley Cook of Kirkwood pleaded guilty today in federal court in Kansas City to commercial sex trafficking of a young, mentally deficient woman who prosecutors says was coerced into being a sex slave for several years while she was tortured in a trailer home located in a wooded area outside Lebanon, Missouri.

In an announcement today federal prosecutors say that Cook watched the victim, identified in court documents as "FV" (female victim), being sexually abused and tortured in live online sessions and as depicted in photos and videos that he downloaded from the Internet. Cook, 33, admitted that he traveled to Lebanon on multiple occasions between 2006 and 2009 to engage in sessions of sexual acts and torture with the victim. In exchange, Cook paid the victim's "master" for these sessions with such items as computer hard drives that contained images and videos of bondage, domination, sadism and masochism, which he had downloaded from the Internet.

Cook admitted that he was aware that the victim was coerced into these sexual acts and that she was unable or did not want to consent to any of these acts. He also confessed that he was aware of other men who engaged in sexual acts and torture with the victim. He witnessed the victim being whipped and locked in a dog cage, as well as being tied up and shocked with multiple electrical devices. Cook described the abuse suffered by the victim as the "most extreme" he had ever seen.

Cook told prosecutors that the victim, who he and his accomplices referred to as "slave," was "not that smart " and did not have a good grasp of the English language.

Cook also admitted that he suggested ideas of how to make money off of the victim by selling images of her torture on a paid Web site. He provided new tips and techniques of how to torture and engage in sadistic sexual acts with females.

In today's binding plea agreement, the government and Cook jointly recommend to the court a set sentence of 20 years in federal prison without parole. Cook must also pay restitution to the victim. In addition to the sentence of imprisonment, the court may impose a term of supervised release up to life. Cook must also forfeit to the government the computer media he used to commit the offense. Today's plea agreement doesn't provide Cook any credit for cooperating with the government.

At one point, prosecutors claimed that Cook tried to arrange for a hit man to kill one of the Cynthia Cordes, the lead prosecutor in the case, as well as the "slave" to keep her from testifying."

Under the terms of today's plea agreement, the charge surrounding the murder-for-hire of the sex victim was dismissed. The allegation that he wanted the prosecutor dead could be brought up in the sentencing phase, resulting in additional prison time. Prosecutors also agreed to dismiss a related indictment against Cook for being a drug user in possession of a firearm. A sentencing hearing will be scheduled after the completion of a pre-sentence investigation by the United States Probation Office.

Cook is the third defendant in this human trafficking case to plead guilty.

Co-defendant Dennis Henry, 51, of Wheatland, formerly the postmaster of Nevada, Mo., pleaded guilty to his role in the conspiracy to commit sex trafficking by force, fraud or coercion. Henry also pleaded guilty to transporting the victim across state lines for sexual activity.

Henry admitted that he engaged in sex with the victim, and participated in torture sessions with FV that would last for hours. Henry saw pictures of FV's vagina sewn shut, which he was told was a form of punishment. Henry also admitted that he visited FV at a Lebanon strip club where she was forced to work.

Under federal statutes, Henry is subject to a sentence of up to 15 years in federal prison without parole, plus a fine up to $500,000 and an order of restitution.

Under federal statutes, Noel is subject to a sentence of up to five years in federal prison without parole, plus a fine up to $250,000 and an order of restitution.

Ed Bagley, the ringleader who allegedly lured the teen runaway into becoming his sex slave, has yet to plead guilty. His trial is slated to begin in February.

This case involving all four men is being prosecuted by Assistant U.S. Attorneys Cynthia L. Cordes, Paul Becker and John Cowles. It was investigated by the FBI in conjunction with the Human Trafficking Rescue Project.