The Same Old Story For the Rams 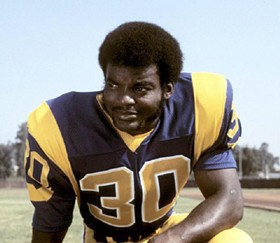 The Rams lost yesterday. I know, nothing new there, right? Well, you think it was nothing new, and you're right, but you may not realize just how right you are.
The Rams lost yesterday. In virtually the exact same way they've lost every other game this year. Now that is a true statement. A depressingly true statement. Though, to be fair, there were at least some extenuating circumstances, such as the presence of Kellen Clemens -- a quarterback I was actually really really high on the year he was drafted; not a great call on my part -- taking snaps for the boys in blue. Still, though.
Watching the same game from the Rams every Sunday is a special kind of misery, really. At least get creative with the way you lose, guys.
Although I will say hearing Harvey Dahl screaming obscenities at a ref with an open mic may very well have been the awesomest thing I can remember in quite a while.
Here was the script for yesterday's game: defense plays brilliantly out of the gate, shutting down an opponent whose offense has been a big part of their success for the season. Secondary has a couple lapses but overall the D is keeping the opponent off the board. Offense struggles badly to get anything going, though in the early parts of the game they at least move the ball and kick a couple field goals. Things look moderately okay through the first half. Second half begins, opponent makes a couple of adjustments, scores once or twice, and things start looking grim. Offense still can't do anything, at all, to help keep the D on the sidelines for a solid breather. One mistake is made on special teams, opponent pulls an easy score, game is out of reach.
Actually, I will say there was some intrigue at the end of the game, which is kind of unusual for this team. Clemens ran the two-minute offense better than anyone else we've seen this season, and Danario Alexander made a truly incredible catch in the endzone for the Rams' only touchdown of the day.
Quick side note: seriously, did you see that catch by DX? He was literally two feet above Pac-Man Jones at the highest point of his jump. It was unreal.
Unfortunately, another bad-ish special teams play sealed the Rams' fate as Josh Brown sent a terrible onside kick right into the Bengals' waiting arms. I have a hard time blaming Brown too much, though; onside kicks are an incredibly low-percentage play anyway.
That's the formula for the 2011 St. Louis Rams: no offense whatsoever, a really good defense that simply can't cover all the holes forever, and one or two mistakes that ultimately put the game out of reach. Repeat ad infinitum. Twice against Arizona it's been a punt return by Patrick Peterson that's sunk the boat. Yesterday it was a couple very bad penalties (though in fairness to everyone on the field it was one of the worst officiated games I can ever recall seeing), and one busted coverage on a punt return. I could go on, but what's the point?
Further notes: