Okay, okay. So not all the 40 people expected to attend tonight's "Fleshtivus" party are nudist, per se. Some are exhibitionists. Others label themselves as "sex-positive" -- believing that their sexuality (and exposed genitalia) is nothing to be ashamed of. A handful may not get naked at all. They'll just take in the scenery.

"It's a clothing optional party," explains organizer Kendra Holliday. "It's whatever you feel like. Some people may just be topless. Some might wear an open robe. Of course, I'll be naked the whole time -- you've got to lead by example."

Members of the website Sex Positive St. Louis have been hosting naked parties every other month for the past year, with tonight's first-ever Fleshtivus a spin-off of the Seinfeldian holiday, Festivus.

"Instead of airing your grievances (like Festivus), we'll share with each other our biggest regret of the past year," says Holliday. "There's something about sharing your personal disappointments while naked that opens you up to a new level of vulnerability. It can be very cathartic." 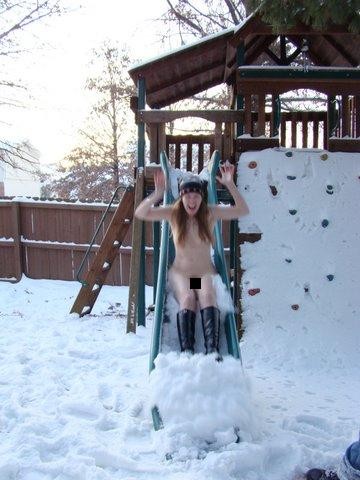 Fleshtivus isn't for everyone. Those attending tonight's gathering -- taking place at an undisclosed south city home -- have all been personally vetted by party organizers.

"We tell people interested in coming to our naked parties to first attend one of our happy hours or other clothed get-togethers," says Holliday. "We're not going to judge you on attractiveness. We just want to weed out any sex offenders or sociopaths."

The female-to-male ratio of those attending Fleshtivus is expected to be pretty even, though men always tend to RSVP first for the nude parties. (A healthy discussion on that phenomenon can be found over at Sex Positive St. Louis.)

One might think that a clothing-optional gathering in the middle of December would be less than ideal for the gentlemen, especially considering cold weather's effect on their anatomy. (Another Seinfeld topic, "shrinkage" comes to mind.)

"When I see men walking around flaccid, that's very comforting. I think the bigger insecurity for men is that they'll get an erection at the party."

So, how many guys do you think will be bringing a "Dick in the Box"?

"Ooh, I hadn't thought about that," says Holliday. "Though I think most everyone attending already has all that they need in that department. A fruitcake might be better."