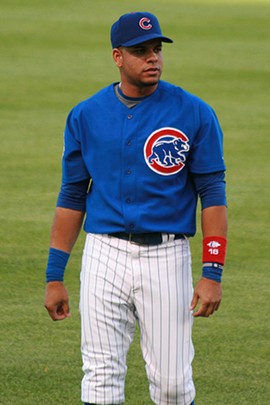 While the Cardinals were busy making sure they had Skip Schumaker around to look handsome in team photos, the Milwaukee Brewers went out and actually landed a player who should improve their team in 2012, signing third baseman Aramis Ramirez to a three-year contract.
Details haven't been released as of yet, but the deal is thought to be worth somewhere in the $34-37 million range; not bad value for a player with Ramirez's offensive ability. His defense has slipped the past couple seasons according to most available metrics, but this is still a player who has posted an OPS better than .850 two of the last three years, with his tough 2010 season largely fueled by a flukey low BABIP.
The Brewers have had a tough time filling their third base position for pretty much the past decade. Ryan Braun played one season there but was so atrocious they moved him to left field the season after he won Rookie of the Year. Bill Hall had one decent year over there, and Casey McGehee looked like a steal after the Brewers picked him up from the Cubs. He couldn't maintain, though, suffering through a miserable 2011, and is on his way to Pittsburgh now.
This is a fairly solid signing, and should finally give Milwaukee a bit of stability at the hot corner.
That's not to say there aren't risks, of course. Ramirez is reaching that age now -- he'll turn 34 early in the upcoming season -- where collapses aren't unheard of. It's possible he could just fall off a cliff. I don't think it's particularly likely, but it wouldn't be the strangest thing to ever happen.
Even if he doesn't implode, Ramirez likely won't produce any excess value on this deal. Just to give a nice round number let's assume he'll be making $12 million per season. At the current going rate for a marginal win, he'll need to worth about two and a half wins per season to hit the break even mark. A-Ram was worth 3.6 wins in 2011, but wasn't nearly as good the two previous seasons.
In 2009, he was just above league average, worth 2.2 wins. In 2010 -- that flukish season I mentioned earlier -- he was worth an appalling 0.4 wins. Three year total: 6.2 wins above replacement. Again, I don't think there's any reason to believe that 2010 season will be replicated, but I also don't think it's very likely Ramirez will do as well as he did in 2011. I would call 3.5ish wins pretty much his ceiling at this point in time.
Personally, I think Ramirez will be worth something like 3 wins next year, and between two and three in both 2013 and '14, respectively. Say, eight wins total over the course of the contract. That puts him pretty much right in line with what the Brewers will be paying him.
The Brewers improved their club by signing Ramirez, but they won't be getting great value, I don't believe. The lesson: you can certainly upgrade paying market value, but it's tough to really get ahead doing it that way.