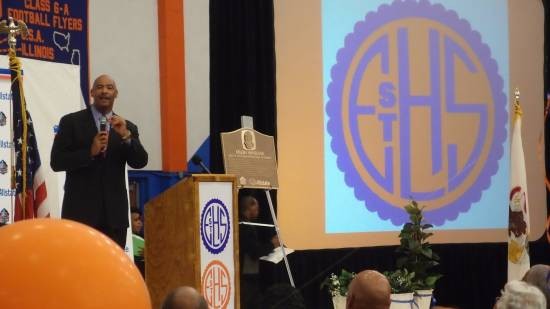 On this day, Kellen Winslow, legendary San Diego Chargers tight end and East Side alum, was honored, as part of the pro football Hall of Fame's "Hometown Hall of Fame" tour.

As we mentioned in our feature story on East St. Louis high school football a couple of weeks ago, the residents here take much pride in their city's history. For a town with a current population of about 26,000, East St. Louis claims a long list of famous names, from Miles Davis to Jackie Joyner-Kersee to Brian Cox to Katherine Dunham to Josephine Baker.

Winslow's homecoming, though, was a particularly cathartic event. The football great, some around town think, doesn't come around and give back as much as some of those other big names-- for instance Joyner-Kersee built a rec center and Cox, Howard and Miles can often be spotted on the sidelines of sporting events. Despite being the most prominent Flyers football player of all time, Winslow has not had his jersey retired at the school. When it was supposed to happen some years back, there was a mild dispute between Winslow and the administration-- a Flyers assistant coach named Tucker Joe recently recalled that Winslow was concerned that the school was just trying to milk his name for profit.

But on Friday the wounds seemed healed and it was all love.

Mayor Alvin Parks announced that the city would name Winslow's childhood street, 22nd Street between Martin Luther King Drive and Ridge Avenue, Kellen Winslow Way. School District 189's new superintendent, Arthur Culver, presumably looking to connect the ceremony with his aims to improve the city's academic standing, told the crowd that Winslow exemplified how hard work breeds success and how students should be inspired whenever they pass in the hallway the plaque that would be presented to Winslow.

Large projection screens around the gym showed highlights of some of Winslow's most memorable games and plays, culminating, naturally, with his epic thirteen-catch performance in the famously hot and humid 1981 AFC divisional playoff game against the Miami Dolphins and the iconic image of a drained and sweaty Winslow being helped off the field by his teammates. For those interested, the entire game, complete with Harry Kalas NFL Films narration, is available on Hulu.com. It is titled"The Kellen Winslow Game."

Winslow's football success remains especially legendary for those who remember his pre-athletic life. He didn't come out for football until his senior year of high school. Before that he was just an unusually tall chess phenom, who spent his extracurricular time hunched over tables mastering the movements of knights and rooks.

By the time Winslow was introduced, some students seemed restless and eager to begin their weekends.

So as he stepped to the stage, he said into the microphone, "Can I please have everyone's attention?"

"The students sitting at the top of the stands, the students who think this is a waste of time, who say 'I don't know this man,' you need to hear this."

The adults sitting in the plastic folding chairs on the gym floor cheered. Winslow listed his athletic accomplishments and then proclaimed that he is less proud of those than he is of his bachelor's degree from Mizzou and his law degree from the University of San Diego. He spoke of how being a well-rounded individual is essential whether you want to be a basketball player or an engineer or a rapper.

"For those myopically focused on one thing, you're not taking advantage of what this world has to offer."

More cheers from the adults.

"Thank you," he said in conclusion, clenching his jaw to hold back tears. "I hope I made you proud."

Standing ovation. Winslow stepped down from the stage and a mass of men and women with cameras immediately engulfed him.

Meanwhile the students rushed down the bleachers and filed out of the gym to the parking lot, where a line of yellow school buses awaited.