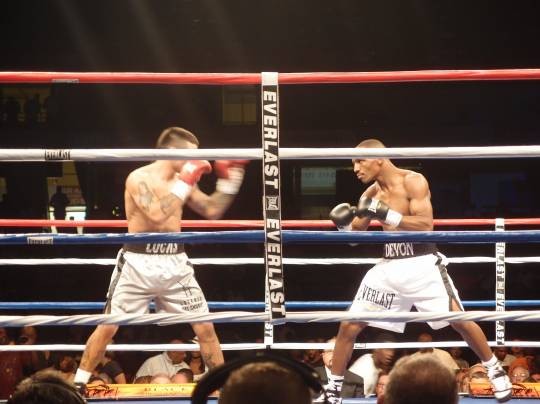 Devon Alexander will fight the hard punching Marcos Maidana on February 25th at the Scottrade Center in St. Louis. Alexander will by vying for Maidana's WBA world light welterweight title.

The fight will broadcast on HBO. Last time Alexander fought at Scottrade, an August 2010 decision win over Andriy Kotelnyk, many in the St. Louis boxing community were disappointed that the event only filled the arena to around half it's 20,000 or so capacity. However, Maidana is a more recognizable name and a more exciting fighter than Kotelnyk, so these attendance figures should be more promising.

To push his career forward, Alexander will need a clear win (to prove he belongs in the same class as Amir Khan, Lamont Peterson, and Tim Bradley) or, at least, an entertaining fight (to wash away the commercial stink of the mundane checkers match loss against Tim Bradley). Alexander's last two fights in his hometown-- against Kotelnyk and Lucas Matthysse-- both ended with controversial decision wins. Some critics wonder if Alexander has twice been the beneficiary of home cooked scorecards. But Maidana is probably less likely than most fighters to worry about the role of the judges. In his 33 professional fights, just five have gone the distance (three of which have come in his last four fights, though).

One undercard for the event has already been announced. Undefeated super featherweight phenoms Eloy Perez and Adrien Broner will fight for the latter's WBO title. This should be a good fight, between two young and rising stars with contrasting styles. Perez, 25 years old with a record of 25-0-2, is a skilled boxer, perhaps best known around here for his 2009 ten round war against Dannie Williams, the heavy-handed talent from St. Louis. Broner, 22 with a record of 22-0, has knocked out 18 of his opponents, half of whom dropped in the first round. After making his professional debut as an 18 year old in 2008, Broner has soared to become, many consider, the best super featherweight in the world.