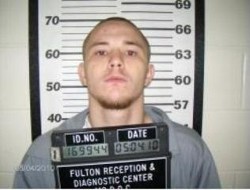 The gruesome killing of a little boy in Wright County led authorities to charge a 22-year-old Hartville man with first-degree murder in what could foreshadow a death-penalty case, reports News Channel KY3.

According to the report, authorities allege that Terry Joe "T.J." Volner slit the throat of a four-year-old boy, whom he babysat, dumped the body into a sewage lagoon, then sent a text message containing the photo of the corpse to his own mother.

The victim, Dusty Guenther, was found Wednesday morning in an ice-covered lagoon near his home, apparently with a wet stick propping up his chin.

No motive is known.

Volner was picked up with a stab wound to his own stomach, possibly self-inflicted. Sgt. Casey Jadwin with the Missouri State Highway Patrol said that Volner confessed to him that he'd killed the child by stabbing him in the neck with a folding-knife.

In addition to the murder charge, Volner faces charges of armed criminal action and abandonment of a corpse. He's being held in jail on a $1 million bond.

Volner went to state prison for a three-year sentence in May 2008 after pleading guilty to charges of stealing animals, burglary, stealing a motor vehicle and knowingly burning, KY3 reports.

Another thing: Volner is apparently is related to an entire brood of mountain murderers, conjuring images of Wild West outlaw clans. According to KY3:

"[Sgt. Glenn] Adler says Volner is related -- but he's not sure how -- to four other people who were charged and later convicted of a murder in 2008. Those are Benny Volner; Benny's brother, Elvis Volner; their cousin, Dennis Volner; and Dennis Volner's wife, Julia. They ambushed and beat Dustin Skaggs, a cousin of the Volners, in Douglas County and dumped him in his car in a rock quarry in Laclede County. Investigators learned Benny Volner thought Skaggs was having an affair with his wife, so he enlisted the help of others to kill him."