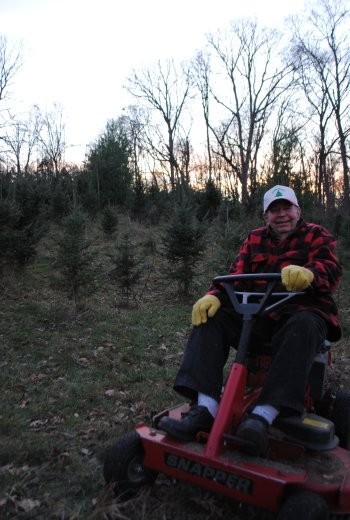 Ralph Lindner passes the small lake on his property as the sun starts to descend behind the hills lined with conifers. Lindner, 73, has trouble walking far. Instead, he's utilizing his "wheelchair" -- a red Snapper lawnmower. Moving past the lake and farther away from his house, Lindner takes a deep breath and looks out over his 70-acre property, Sunbrite Christmas Tree Farm.

"This is the adventure here," he says.

Lindner moved to his sprawling O'Fallon property in 1973. Seven years later he planted his first Christmas tree -- a Scotch pine. Today Sunbrite is one of the few Christmas tree farms around St. Louis. And it almost came to an end earlier this year when the farmer was in and out of the hospital seven times after mistakenly being prescribed two conflicting medications.

"I had a tough year, but I'm happy again," Lindner says. "You can't find a happier person out of the next 10,000. Nobody has ever challenged me on that."

The variety of trees on Lindner's farm has expanded over the years from Scotch pines to Canaan, Douglas and Concolor firs, Norway and Blue spruces, and White pines. Customers find and saw down their own tree on the property, and pay $3.50 per foot in height.

Earlier this month Theresa Cooper and Tim Spakowski visited Sunbrite with their children. Cooper said she prefers live trees because they are fresher and look better, and feel more "Christmas-y." She says her family will be back to Sunbrite next year, too.

Each spring and fall, Lindner and other Sunbrite employees plant between four- and six thousand saplings brought in from a nursery in western Michigan. Not all of those trees will survive to become Christmas trees. The ones that do generally take about six years to mature.

Lindner and Grant Azar, a seven-year Sunbrite employee, make their way through the farm as the sun sinks deeper behind the hills on a recent afternoon. At Lindner's request, Azar breaks off a small twig of a Concolor fir and hands it to the old farmer. He raises it to his nose and inhales.

"That's better than anything Calvin Klein's got out," he says.