Bad Gift-Giver Tries to Defend Himself For Setting Girlfriend on Fire; Loses Appeal 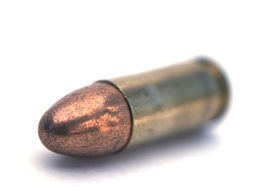 Here's a bit of advice for anyone who commits a serious crime: Public defenders exist for a reason. Paul Garth just learned this the hard way, after attempting to represent himself in a domestic abuse case and receiving a sentence of life in prison. And, no, appealing doesn't help.

Two years ago, Garth decided to give his girlfriend a very special Christmas present: a bullet upon which he had written "I love u." Perhaps understandably, she wasn't terribly impressed -- maybe it would be better to say "she was freaked out" -- and broke up with him on the spot.

On December 17, Garth went over to the house they'd shared in Jennings to pick up his stuff and drop off his keys. As sometimes happens in situations like this, an argument ensued. What is not normal is that around 2 a.m., Garth went to the basement, picked up a can of gasoline, dumped it all over his ex-girlfriend and declared if he couldn't have her, no one could. Then he set her on fire.

Perhaps these aren't the actions of a completely sane man. Nonetheless, after Garth rejected his state-appointed public defender before his trial last year, the court agreed to allow him to represent himself.

The evidence against Garth was fairly damning. Although he swore he didn't actually intend to set his ex on fire -- he didn't think the gasoline would actually catch on fire -- and although he did attempt to smother the fire with a bathroom rug, he refused to take her to the hospital because he was afraid he would go to jail. He finally agreed to take her to Christian Hospital in north county on the condition that she tell the doctors she had set herself on fire because she was grieving over the death of her grandmother.

But he told his ex's former mother-in-law that they'd been messing around with the stove, and her son that she'd doused herself with kerosene. Suspicious, the victim's brother went to visit her in the hospital. She had a tube down her throat, so he asked her to blink twice if someone had attacked her. She blinked twice. He called the Jennings police.

When the case came to trial in the summer of 2010, Garth decided he didn't like his public defender and would be better off representing himself. The judge asked him -- nay, begged -- him to reconsider, but Garth refused.

He only reconsidered after the state had rested its case. By then it was too late to prevent himself from being sentenced to prison for life. This fall, he appealed on grounds that he didn't receive adequate representation.

Appellate judge Sherri Sullivan agreed, but in her judgment wrote that this wasn't the court's fault.

Lessons to be learned here:

1. Lawyers, despite the bad rap that they get, can be helpful. 2. If someone doesn't like the gift you give them this holiday, the appropriate response is not to set them on fire.