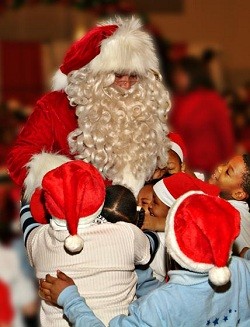 One of the surest signs that the world is going to hell, at least according to Dear Abby and Emily Post and the rest of the nation's advice-givers and etiquette experts, is that young people have abandoned the custom of writing thank-you notes for gifts received.

Which makes us think: This time of year, nobody gives more gifts than Santa. But just how many thank-you notes does he get? (And no, all those cookies don't count.)

On December 27, from 10 a.m. to 2 p.m., Santa will return to the St. Louis Galleria (and the Galleria only) and re-assume his throne so little tykes can come back and thank him in person. There will be no elves, so no pictures. Just sincere, full-hearted gratitude.

"It's a little twist on the idea that Santa gives and kids get, get, get," says Terri Waters, a spokeswoman for the Galleria. "It's good for kids to know how to say thank you."

This is the second year Santa has returned to the Galleria to accept thanks. Last year, says Christine Poehling, the mall's marketing manager, 100 kids came back to see him. And they were excited about it!

As far as Waters knows, the Galleria is the only place where kids can go thank Santa in person, which means extra hours for just one Santa. It's a delicate operation.

"Santa needs to be careful not to say, 'So, what did you get?'" Waters explains. "Mostly he just lets the kids talk."

Adds Poehling: "Parents really appreciate Santa coming back. They like the idea of helping kids learn how to express gratitude."