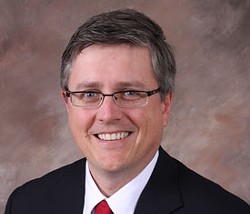 Amidst all the hooplah and hand-wringing of waiting for Albert Pujols to make up his effing mind about just how much money is enough, there's another story unfolding for the Cardinals that could have just as large an impact on the long-term health of the franchise, and it probably won't get even a tenth of the attention. (The Post-Dispatch buried the article on page C7 of today's sports section.)
The news? The Houston Astros are all set today to name Jeff Luhnow, now-former head of the Cardinals' scouting and drafting department, to be their new general manager. Luhnow joined the Cardinal organization all the way back in 2003, brought in due to his business and statistical savvy. His first draft with the club was the disastrous 2004 class, which the Cards conducted with a skeletal scouting department and leaned almost exclusively on a slapdash stat analysis of the available players. His first year fully in charge of the scouting department was 2005, a draft which netted the Cardinals Jaime Garcia, Colby Rasmus, and Tyler Greene.
Congratulation to Mr. Luhnow on his first GM job. If there's anyone in baseball who can turn around the moribund Astros in relatively short order, I trust Luhnow as much as just about anyone to find a way.
Make no mistake, this is very bad news for the Cardinals. Under Luhnow's stewardship, the Cards have seen their minor league system go from among the worst in all of baseball to a top seven, maybe even top five system despite never having the chance to draft within the top ten. Of course, even top draft picks in baseball aren't the same as top ten draft picks in football or basketball, but the fact remains the Cardinals haven't had the chance to put it on auto-pilot and select a David Price or Steven Strasburg.
Even so, the Cards will enter the 2012 season with two of the top five pitching prospects in all of baseball in Shelby Miller and Carlos Martinez, plus another four to five players who could all be safely described as true blue-chippers. The Cardinals haven't been able to say that in, well, as long as I can remember. The closest I can think of was right around 1998, when the club had Rick Ankiel, JD Drew, and Adam Kennedy all the system together for a very brief period. And even that group doesn't boast the same kind of depth this current Cardinal system does.
Martinez in particular should be a real feather in the cap of Luhnow, as the Cards took a big chance on the diminutive fireballer, walking him through the tough process of straightening out his paperwork and securing his eligibility to sign a minor league contract. It would have been easy to stay away from Martinez in spite of his enormous talent, walking away from a difficult and protracted process that had no guarantee of paying off. Luhnow and the Cardinals, though, stuck with the kid and guided him through, and now they have one of the highest-upside arms in all of baseball to show for it.
Hopefully there is a chain of ascension already in place, and the Cardinals have an internal option to replace Luhnow. I'm sure there are plenty of worth candidates externally as well, but considering the remarkable work the scouting department has done in recent seasons I'm hoping there is someone who was already a part of that department ready to step in and continue in Luhnow's footsteps.
It's unsurprising in the extreme to see Luhnow tabbed for a job, as his farm system has been gaining increasing notice from all corners of the game. Still, I don't suppose anyone would blame me for wishing the Cards' system had gotten maybe just a smidge less attention. Even so, the Cardinals and their fans will be enjoying the fruits of Luhnow's efforts for years to come. Now let's just all be glad the Astros are leaving the NL Central soon.