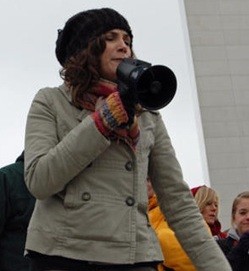 The co-founder of the St. Louis Tea Party has officially left the organization.

In a tweet this morning Dana Loesch writes: "Yes, I am finished with the St. Louis Tea Party. Not keen on grassroots organizing under a candidate, even unofficially. Never will be."

Since helping to found the Tea Party, Loesch has had a meteoric rise on the political landscape, getting a job as a CNN pundit and editor of the right-wing website Big Journalism.

Daily RFT has messages out with Hennessy and Loesch for comment. At this point it's unclear exactly why Loesch left the organization, but Hennessy suggests in today's press release that the two leaders had different opinions on conservative candidates.

"[A]s a local Tea Party organization, we need to focus on the grass roots going into 2012. At some point, though, one party must cleanly break the tension. In this case, the board has moved in the interest of the movement."

"We were asked to stop using our trademark logo by its creators," Hennessy told Tea Partiers this morning. "We decided to comply."