Rams vs. 49ers: What Went Wrong 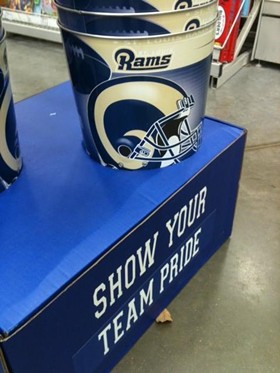 Just when you think the 2011 season can't possibly get any uglier for the St. Louis Rams, along comes a game like yesterday's loss to San Francisco to prove you dead wrong.
The Rams have the worst offense in the NFL. The 49ers have the best defense in the NFL. Put the two together and perhaps it shouldn't be all that surprising to see the Rams get shut out by a score of 26-0. Still, it's tough to swallow. I fully expected the Rams to lose. I did. I fully expected them to look outclassed. But to be shut out in that fashion?
The Rams have no playoff hopes. They have no hope of a winning season. At this point, they're really only playing to try and salvage a little dignity for themselves.
Spoiler alert: dignity nowhere to be found.
Keys to victory reviewed after the jump.
Key #1: Stop Frank Gore
Key #1 could also be listed as failure #1, particularly early on. Gore didn't have a huge game, picking up 73 yards on 21 carries, but the Rams didn't really shut him down, either. Particularly in the early going, Gore picked up yards with little effort expended as the 49ers drove deep into Rams' territory time and time again. Gore didn't go over 1,000 yards for the season against the Rams, which was somewhat of a moral victory, but he did become the franchise's all-time leader in rushing yards.
The defense overall stiffened in the red zone each time San Francisco drove in the first half, but their inability to keep Gore behind the line of scrimmage and get the 49er offense off the field is a huge part of the reason why the time of possession was skewed over 12 minutes in San Fran's favor.
Key #2: Who's the Quarterback?
It's really tough to say whether the Rams succeeded here or not, considering how poorly the offense as a whole and A.J. Feeley in particular played, but I do think sitting Sam Bradford was the right decision.
Honestly, I'm not sure playing Bradford would have resulted in any more offensive success, and the downside was just too great. The risk of seeing Sam take a serious injury thanks to a lack of mobility was just too much to stomach for a team with nothing to play for. Bradford's troublesome ankle wasn't even the problem, really; the issue was the hits he may have taken thanks to an inability to move effectively even within the pocket. You never want to see a player sitting, particularly when that player is your franchise quarterback, but the very fact he is the franchise quarterback made the decision to hold Sam out of yesterday's game the right one.
Key #3: Match San Fran's Intensity
Of all the things the Rams were unable to do Sunday afternoon, this is the single biggest one. The Rams didn't come close to playing with the same fire as the 49ers, and it set the tone for everything else that followed.
James Laurinaitis had a solid game, and Craig Dahl of all people had a big afternoon, but beyond that there was little to write home about either in performance or intensity. More than anything else, the run game really tells the story here. There's plenty of technique and scheme in an NFL running game, to be sure, but in the end there's also a whole lot of want-to up front. Blocking requires footwork and some smarts, but it's also largely about desire and drive. Measured that way, the desire and drive of the Rams up front was just, well, nonexistent.
Steven Jackson had 19 yards on 10 carries, for an average of 1.9 yards per attempt. Jerious Norwood went one better, getting the same 19 yards but taking 11 tries to pick them up, good for a 1.7 yards per attempt average. Overall, the Rams averaged 1.3 yards per rushing attempt, without a single first down on the ground.
You want to know why the Rams were shut out yesterday and beaten so soundly? The answer is right there. San Francisco physically dominated the game and embarrassed the Rams.
I'm tempted to say the season couldn't possibly get any uglier now, but we've heard that before, haven't we? And, as Rams fans, I think we all know not to trust it.