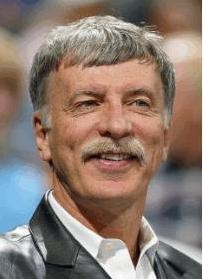 Stan Kroenke, the billionaire owner of the St. Louis Rams, was reportedly in fear for his safety recently when his former house servant -- Mark Waldo -- went wacko.
According to TMZ, Waldo stole a gun from Kroenke's Malibu, California, mansion and threatened to shoot himself in the head. Kroenke filed for a temporary restraining order demanding that Waldo move out of his home and stay 100 yards from him and his wife.
Waldo stand 6'2" and weights 300 pounds, according to TMZ.
Hmm, 6'2", 300 pounds and angry!? Kroenke shouldn't be filing a restraining order. He should be recruiting this guy for the Rams' piss-poor offensive line!