Mark Twain, who would have turned 176 this past Wednesday, was famous for writing books about boys and their adventures. But in his other life as Samuel Clemens, he had an older sister. Which may explain why he wrote Advice to Little Girls in 1865, which includes this nugget of wisdom: 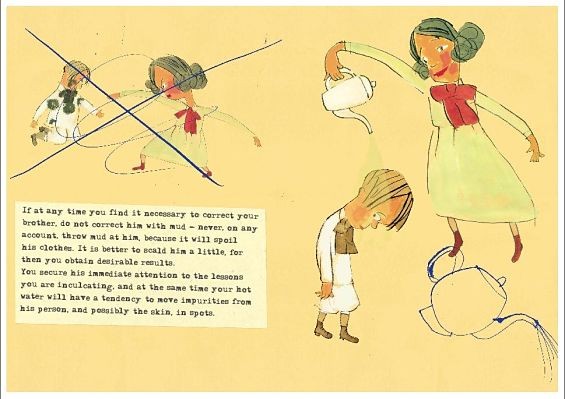 Later on, Clemens would become the father of three daughters. It's unclear whether they ever read his advice or acted on it. It probably would have been frustrating if they did. Particularly the part about how good little girls never sass old people unless the old people sass them first.

Why are we telling you this? Why, because Advice to Little Girls has just been republished by the Italian publishing house Donzelli Editore with beautiful new illustrations by Vladimir Radunsky.

Writes Radunsky in the New York Review of Books blog:

American children's literature in those days was mostly didactic, addressed to some imaginary reader--an ideal girl or boy, upon reading the story, would immediately adopt its heroes as role models. Twain did not squat down to be heard and understood by children, but asked them to stand on their tiptoes--to absorb the kind of language and humor suitable for adults.

The actual book is available only in Italian, but you can admire the pictures and read it in English on the NYR blog.

We hope a new generation of little girls will find it helpful. Especially this part:

Apropos of Nothing Books