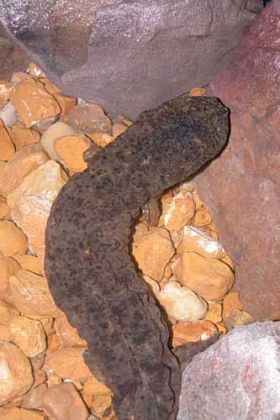 Some call them snot otters, others old lasagna sides, grampus and devil dogs, but we prefer the colloquial term hellbender. If you're going to name a salamander, you might as well make it sound way more badass than it is.

"Capillaries near the surface of the hellbender's skin absorb oxygen directly from the water -- as well as hormones, heavy metals and pesticides," explained Jeff Ettling, Saint Louis Zoo's curator of herpetology and aquatics.

All that shit killed off most of the hellbenders. Only 600 remain alive in the wild, making them a lock for the endangered species list. Since hellbenders are generally considered a bellwether of the general health and cleanliness of our waterways, the Zoo and the Missouri Department of Conservation decided it would be in the best interest of Missouri's humans to bring back the hellbender.

And so they did. Sort of. Over the past two weeks, 63 baby hellbenders have hatched at the zoo's Ron Goellner Center for Hellbender Conservation. They are the first hellbenders ever spawned in captivity. And zoo officials promise there are 120 fertilized eggs left to go! But it will be several years before they can go back into the wild.

The hellbender restoration project began in 2004 with the construction of the Goellner Center, which was funded by private donors. It includes two outdoor streams and one indoor stream which are a fair simulation of the hellbenders' natural habitat, except that the water is clean. The hellbender spawn (can we just call them hellspawn?) and their parents, both of whom come from the wild (the north fork of the White River, to be precise), live in the indoor stream, which is in the basement of the zoo's herpetarium.

Hellbender reproduction, in case you're wondering, is only slightly kinky. It's all external, but it does involve the male kidnapping the female and holding her hostage in his hidden brood site until she lays her eggs. Then he sprays them with seminal fluid. And then he kicks her out. But happily for her, he's the one who gets stuck guarding the eggs. 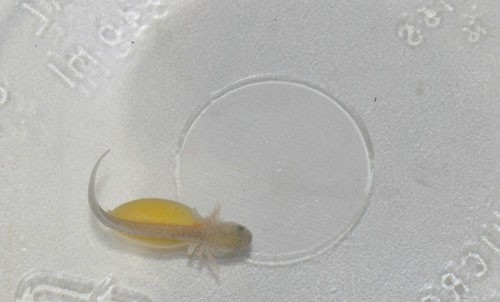 The hellspawn are pretty weird-looking right now, since they're still partially in their yolk sacs. This is what they rely on for nutrition. They'll lose their external gills by the time they're two years old, and they'll reach sexual maturity between the ages of five and eight. At that point, they could be as long as two feet. And then the zoo will release them back into the wild.

Zoo officials are hopeful that their efforts will pay off. "We have a 15- to 20-year window to reverse this decline," said MDC herpetologist Jeff Briggler. "We don't want them disappearing on our watch."