William Franke, the man who once owned the St. Louis Globe-Democrat and who in 2004 helped found Swift Boat Veterans for Truth to attack the war record of Democratic presidential candidate John Kerry, is today getting some bad press of his own.
Franke, who made millions in real-estate investments and other ventures through his St. Louis-based holding company Gannon International, is the subject of dozens of lawsuits filed this year that suggest he and his various business entities are in a financial tailspin.

In March, PNC Bank took Franke and several of his subsidiaries to federal court in St. Louis, claiming that the businessman and his companies were behind on repaying nearly $20 million in promissory notes secured through St. Louis apartment complexes owned by Gannon and Franke. One of those properties, the 272-unit Springwood Apartments in suburban Bel-Ridge, drew headlines this spring when the city quit issuing occupancy permits after Gannon let the property decline to a point it was considered unsafe for habitation.
The PNC case is still wending its way through court, but already a judge has ordered the sale of at least two of those apartment complexes -- including the 336-acre Suson Pines in south St. Louis County -- in order to repay the notes. Meanwhile, in October, a judge in St. Louis County Circuit Court issued a summary judgment ordering Franke to pay Centrue Bank $3.4 million for loans taken out against several other St. Louis properties he owns under different limited-liability companies.

Also last month Franke's former chief operating officer at Gannon International, Robert Greene, filed more than a dozen lawsuits against his former boss in St. Louis County Circuit Court. Greene, who worked for Franke for 26 years before resigning in March 2010 over disagreements with Franke, contends in court filings that he still has an equity stake in 19 different Gannon subsidiaries and alleges that Franke is improperly siphoning money from those companies for his "own personal use" and to pay the expenses of other businesses under his control.
On October 26, Franke fired back, suing Greene in federal court on claims that he borrowed $750,000 from his former boss in 2007 and has yet to pay off more than $500,000 of the original note.

​Greene's first legal skirmish with his ex-boss date back to earlier this year when he and another former Gannon executive, Walter Blocker, sued Franke in St. Louis County Court regarding a Vietnam business deal gone bad. Greene and Blocker, who ran Gannon's Southeast Asia operations, say Franke promised them an ownership percentage in Gannon's Vietnam holdings. According to the suit filed in May, Gannon and Franke are now seeking Vietnamese governmental approval to sell a milk factory in the Asian county to Nestle for $10 million without paying Greene and Blocker any proceeds from the sale. The men believe they're owed $1.5 million and $3 million, respectively.
"Gannon is in the midst of a collapse," says Greene in a statement emailed to Daily RFT. Greene notes that the Metropolitan Sewer District is even suing Gannon and Franke for failure to pay utility bill and adds that Franke's Virginia-based IT firm, Gannon Technologies Group, is also suffering.
"At this point, it is understood the Virginia operation is down to but a few employees," says Greene.
Attempts to interview Franke to confirm any allegations against him were unsuccessful. Last week a Gannon spokesman emailed Daily RFT a blanket statement in response to several questions posed to Franke and his company. That statement seemed to pin most all Franke's problems on Greene and Blocker, and read -- in its entirety:

"These accusations are designed to shift focus away from our investigation into the conduct of two disgruntled former employees regarding activities in one of Gannon's overseas subsidiary corporations. Gannon International will not litigate these matters in the press. At this date, our counter litigation is being prepared and we fully expect to prevail when we have our day in court. Gannon International is well positioned to handle these legal matters and there will be no protracted impact on our company while legal proceedings move forward."

This past May, Franke sued Blocker in federal court in St. Louis, claiming that Blocker misappropriated more then $400,000 in company funds. The judge dismissed the claims in August with prejudice. Franke has since appealed the case. This month Gannon also filed a similar lawsuit against Blocker in a Vietnam labor court and released a press release in the Asian nation claiming that Blocker violated Vietnam's Enterprise Law and "colluded with other individuals through a complicated series of related party transactions to defraud the company" to the tune of $6.1 million.

Blocker tells Daily RFT in a statement that he resigned from Gannon in April 2010 because he "disagreed with Franke's poor governance" and failure to meet the loan agreements of a creditor.
"I was also displeased with his threat to initiate legal action for money that he accused me of stealing," says Blocker.

Franke, 67, founded Gannon in 1983 after years of practicing law with a focus on real estate and finance. With Gannon, Franke parlayed those skills to amass a sizeable real-estate portfolio. Profits fron Gannon allowed Franke to dabble for a short-time in publishing, when he purchased the foundering St. Louis Globe-Democrat in 1986. The conservative daily folded several months later, costing Franke and other investors a reported $7 million to $8 million.
Still, until fairly recently, Franke's Gannon International kept humming right along.

As recently as 2009 the company was ranked among the region's largest privately-held companies, according to the St. Louis Business Journal, with annual revenue of $101 million.

In 2002, Franke moved from St. Louis to the Washington D.C. area. A few years later -- in 2005 -- he purchased a $6.3 million mansion in the tony D.C-suburb of McLean, Virginia. Franke called the manse home until March of this year when he sold it for $6.5 million to a limited-liability company called JUYAJ. 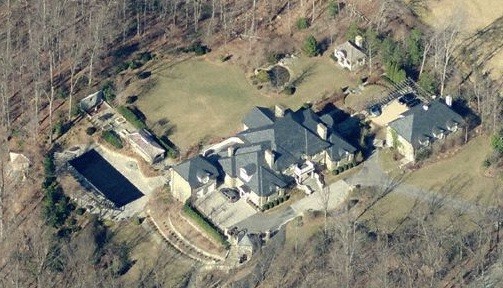 Albert Watkins, the St. Louis attorney representing Greene and Blocker in their lawsuits, says he since learned through independent research that JUYAJ is a trust owned by Washington Nationals' star Jayson Werth, and that the baseball player currently lives in the home. Watkins says Franke now resides in an apartment in the D.C. area.

It was while living in Washington D.C. during the 2004 presidential election that Franke made perhaps his biggest national splash, serving as the "day-to-day operations" manager of the Swift Boat Veterans for Truth. According to his online bio, Franke operated a river patrol boat during a tour in Vietnam and was the commander of a task group that included twelve river patrol boats, multiple aircraft and approximately three hundred ground troops. His service in the Vietnam War ended with him picking up a Silver Star, Bronze Star, Purple Heart and the Vietnamese Cross of Gallantry.

Like other members of SBVT, Franke was outraged that Democratic presidential nominee John Kerry -- a man who'd also served on a Swift Boat patrol during Vietnam and then had the audacity to testify before a Senate committee in 1971 about atrocities by U.S. troops during the war -- was now running to become the nation's commander-in-chief. Running the Swift Boat Veterans for Truth out of Gannon's offices, Franke helped raise a reported $27 million for anti-Kerry attack ads that questioned the candidate's war record.

Franke, himself, had since made peace with the Vietnamese people. In the 1980s Franke began returning to the country, telling the Post-Dispatch in 2005 that he helped organize the first trips to the Vietnam to repair cleft palates though Operation Smile. While on those humanitarian missions, Franke spied business opportunities in Vietnam.

According to the lawsuit Greene and Blocker filed against Franke in May, Franke assigned Greene to set up Gannon's Vietnamese operations in 1993. Years later Greene hired Blocker -- an American living in Vietnam and fluent in the language -- to help the company land business deals. They say that Franke promised them a percentage of the company's Vietnam stake that he is now denying them.

For what it's worth, the two aren't the first of Franke's former employees who've publicly challenged the actions of their former boss. Steve Hayes was a Gannon employee and member of Swift Boat Veterans who severed a 35-year friendship with Franke in 2004 and ended up voting for Kerry.

In a 2006 interview with the New York Times, Hayes accused Franke and the Swift Boat Veterans for Truth of twisting Kerry's war record.

"It became clear to me that it was morphing from an organization to set the record straight into a highly political vendetta," said Hayes. "They knew it was not the truth."

Bidness Politics See You in Court!