Update: JC Corcoran has reportedly been suspended from KTRS for his tweets Sunday and Monday. In a video on his website today and also on Twitter, Corcoran blamed the Riverfront Times for drumming up attention about his profane tweets directed at his critics.

"It's the usual suspect. The RFT and these little slimes that sort of buzz around," said Corcoran in his "Daily Dose" online.

Earlier this month, KTRS (550 AM) personality JC Corcoran caused a stir in the local sports world when he announced on Twitter that Albert Pujols would announce a new contract with the Cardinals on November 18.
The Cardinals denied the rumor, and November 18 came and went with Pujols remaining a free agent. Now, Corcoran has another prediction.
Yesterday he tweeted that the Cardinals would soon announce a new deal for the slugger that is "significantly less than ten years."
Cardinals fans on Twitter weren't having any of it. They mocked Corcoran online, comparing him to a modern-day version of the "Boy Who Called Wolf."
Though judging from Corcoran's responses on Twitter (below), he's more like the wolf in the "Three Little Pigs." He does a lot of huffing and puffing. The blowing he'll leave to you. 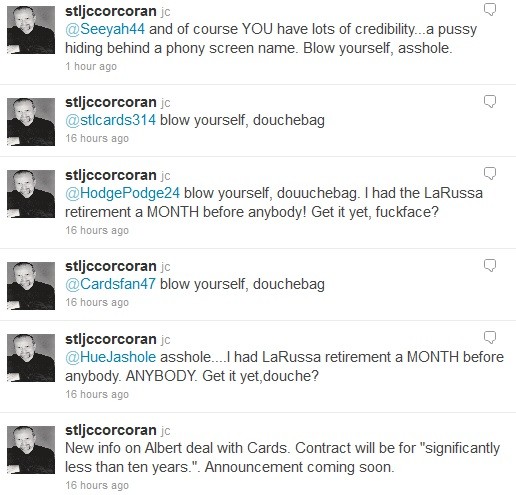