Venturing Further Into the Little House, "The Book No Depression Could Stop" 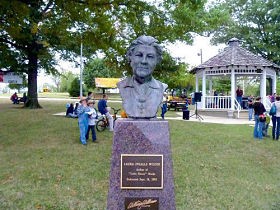 This week's feature story, "Little House in the Present," is, among other things, about the circumstances that led Laura Ingalls Wilder, a farm wife in Mansfield, Missouri, to write the Little House on the Prairie series, a collection of autobiographical novels about her childhood on the American frontier.

Hint: When Laura sat down to write the first book, Little House in the Big Woods, in 1932, it was not because she was overcome by nostalgia for the good old days. Like a lot of Americans in 1932 -- like a lot of Americans now -- she was suffering from the aftershocks of the stock market crash three years earlier and was looking for a way to earn some cash.

Little House, Long Shadow by Anita Clair Fellman describes the circumstances that led Laura to her little desk in her little house in the Ozarks and the different ways the Little House books have been interpreted in American culture. It also analyzes the subtle current of Libertarianism that runs through the entire series (it's easy to overlook it, but once you notice it's there, hoo boy is it hard to ignore) That strain is most likely the work of Laura's daughter and editor, Rose Wilder Lane.

Lane herself was a fascinating character. After escaping Mansfield as a teenager, she made her way to San Francisco where she found work first as a telegraph operator and then as a newspaper reporter. Her career as a journalist took her all over the world, from bohemian Greenwich Village (where only an auspiciously-timed case of the flu prevented her from becoming joining the Communist Party) to Paris to Weimar Germany to Baghdad to the hinterlands of the Soviet Union (where she finally rejected Communism in favor of personal freedom) and to Albania, which she adopted as her second home. In her late seventies, she was still reporting, filing dispatches from Vietnam for Women's Day.

William Holtz chronicles her extraordinary life in his biography The Ghost in the Little House and works hard to give her her proper due for her role in creating the Little House books. But if you're interested in the roots of Lane's libertarianism, look no further than her introduction and afterword to On the Way Home, the journal Laura kept during the family's migration from De Smet, South Dakota, to Mansfield in 1894.

Laura's journal itself is not terribly exciting, but Rose's commentary is fascinating, both for her anger at the radicals who demanded that the government ease the Panic of 1893 by expanding and creating public works jobs, and her complicated feelings toward her mother, Laura: her desire to be a good daughter combined with lingering resentment for injuries inflicted during childhood. (Think of parts of the afterword as a substitute for more conventional talking therapy, particularly the part where Laura misplaces a $100 bill, the family's life savings, and questions young Rose about its whereabouts.)

See also Young Pioneers, a novel Lane originally published in 1932, the same year as Little House in the Big Woods, which draws on an old family story that should be familiar to readers of Wilder's On the Banks of Plum Creek: How the grasshopper plague of 1874 destroyed the farm and forced Pa to walk 300 miles east in search of work. At the time Young Pioneers was published (under the title Let the Hurricane Roar, after one of the Ingalls family's favorite hymns), it wasn't clear that the Little House books would become a full-blown series, though Wilder had already started writing the second book, Farmer Boy, about her husband Almanzo's childhood. Why, then, did Lane write and publish the book without telling her mother, who didn't learn of its existence until she saw an ad in a newspaper?

Something to ponder as you sit with your family around the Thanksgiving table tomorrow. 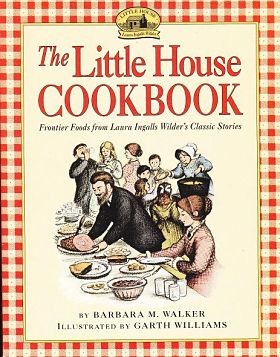 Or you could just think of Farmer Boy, which has some of the best descriptions of food in all of American literature. Truly. Every chapter contains at least one sumptuous meal. Plus Mother Wilder keeps a doughnut jar in the pantry. What ever became of that splendid custom? (Check out David Plotz's essay in Slate about his family's pie gluttony, which begins with a short epigraph from Farmer Boy.)

The Little House Cookbook by Barbara Walker has detailed instructions for how to prepare some of these splendid dishes -- and also some of the less splendid ones from Laura's more hardscrabble childhood -- in your very own kitchen.

Or you could read Wendy McClure's very entertaining blog about her own Little House experiments and travels, and then her book The Wilder Life: My Adventures in the Lost World of Little House on the Prairie. (I'm told some Lauraphiles find her approach too irreverent, but how many things have been ruined by reverence?)

Or -- and maybe this is the very best suggestion of all -- go back to the books, starting with Little House in the Big Woods. If you haven't read them in a while, you'll be surprised at how well they hold up. I think I may have even enjoyed them more this time around than I did when I first picked them up 25 years ago. 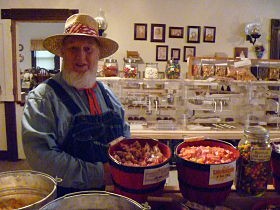 Should you feel inspired to go to Mansfield after all of this -- go! It's just four hours away, in the middle of some very pretty country. The Laura Ingalls Wilder Historic Home & Museum is open all year round, as is Mansfield Woods, Kate Barrad's vacation cottages. If you can, visit the Historical Society and go see Jim Kaiser at Laura's "Sweet Memories" and check out his wall of Ingalls-Wilder memorabilia, which spans the 100 years from 1857 when Almanzo was born to 1957 when Laura died. (The store is closed during the winter, so if you're planning on going in the near future, call ahead.)

Go. They could use your help down there.