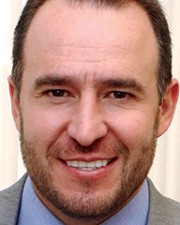 So, just who is the "super agent" representing Albert Pujols in his free-agency?
His name is Dan Lozano and he's rumored to ply clients with prostitutes and alcohol in order to get them to sign on the dotted line. He's also a man who's reportedly hurting for money, spending cash as quickly as he earns it. And, according to a salacious piece this week in Deadspin, Lozano is counting on Pujols to help him out of financial straits by signing the biggest contract in baseball and making amends for the Cardinals getting a hell of a deal the past eleven seasons.
Aside from the accounts of Lozano whoring around and -- how should we put this? -- his taste for, ahem, raw food, the following excerpt from Deadspin is perhaps the most intriguing for St. Louis eyeballs.

...Lozano won over Pujols completely, and co-workers say he again did it by becoming who he thought Pujols wanted to see. Danny the Chameleon.

In this case it meant becoming a pious man. Danny the party animal, Danny the drinker, and Danny the Lothario were all gone. It was Good Catholic Daniel Lozano who came courting, though a colleague at the time says Lozano confided about his church attendance that he "was only going to meet hot chicks." (He wasn't always so courteous to his star client. According to a source, a co-worker once overheard him calling a young Pujols "just some Dominican monkey.")

Albert Pujols was the best thing that ever happened to Dan Lozano, who by 2004 was nearly broke, colleagues say. A source familiar with the negotiations says the Cardinals knew of Lozano's money issues (as did many GMs around baseball), and they knew he was desperate to get a contract extension signed as soon as possible.

"How can you handle your client's finances when you can't handle your own?" asks a rival agent.

The result: eight years at $14.5 million a year. One executive called it "the best owner's contract in baseball," according to a baseball source.