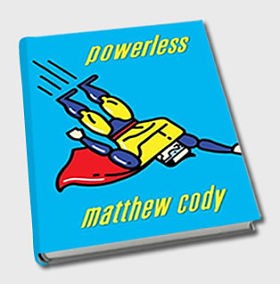 Sometimes the bestseller list has a sense of humor. Just look at some of the pairings this week: 1Q84 (a play off of 1984; it makes more sense in Japanese, apparently) and 11/22/63, followed by Death on a Platter and Wreck the Halls: Cake Wrecks Gets "Festive". Then there's Steve Jobs, followed by Goodnight iPad. Really, it's true! And there's also Rag & Bone a book of poems by Kathryn Nuernberger, a professor at University of Central Missouri, and William Greenleaf Eliot: Conservative Radical, a book of essays about the founder of Wash. U. and grandfather of T.S. Eliot by Earl K. Holt. (Yeah, that one wasn't as good.)

New to the kids' list this week is Powerless, a tale of kids doomed to lose their superpowers at puberty, by St. Louis native and former comic book store-haunter Matthew Cody, who has since moved to New York to haunt the comic book stores there.

1. 1Q84 by Haruki Murakami 2. 11/22/63: A Novel by Stephen King 3. Death On A Platter: Josie Marcus, Mystery Shopper by Elaine Viets 4. Wreck the Halls: Cake Wrecks Gets "Festive" by Jen Yates 5. Blue Nights by Joan Didion 6. Steve Jobs by Walter Isaacson 7. Goodnight iPad: A Parody for the Next Generation by Ann Droyd 8. Rag & Bone by Kathryn Nuernberger 9. William Greenleaf Eliot: Conservative Radical by Earl K. Holt 10. Were You Born on the Wrong Continent?: How the European Model Can Help You Get a Life by Thomas Geoghegan