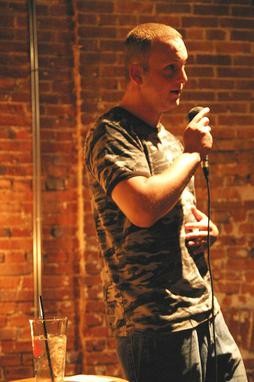 Traditionally, the night before Thanksgiving is a HUGE party night in the Gateway City -- perhaps the most boisterous of the year.

With so many members of the St. Louis diaspora flocking back home, local funnyman Joe Murray has decided to mount a show of our returning standups, to be held down in the newly-renovated bowels of Brennan's in the Central West End.


Daily RFT: So this showcase that's coming up on Wednesday --

I see. Normally, it's the fourth Wednesday of every month and features not the big local names, but rather, the newbies. Is that right?

Yeah, it's usually just for local guys that aren't professional comedians, but that I think are pretty good. I try to get them when they have a good eight-or-so minutes. Usually, to get eight good minutes takes a while.

Why do you think that is?

I really don't know. Lately, standup has been romanticized more than it probably should. It's kind of like how people romanticize drug use. It seems harsh and gritty, but people are drawn to it. I think the same thing is happening with comedy.

The comics you see on television, every one of them has been doing it at least five years. And you hear them on these podcasts talking about all these terrible shows they did over the years. And so [newbies] will show up at a terrible show, and they'll be like, 'This is where I pay my dues. This is a notch in the belt.' Whereas, I would be perfectly happy to only do great shows.

Like, they think it's a growing experience that there's nine people in the crowd and they're all drunk. I don't like that at all. I'd rather be in a room of 300 people who want to laugh. And make some money.


How did you get into this racket?

I was a pretty big alcoholic for a while. But I quit drinking. And people had always told me I should give [standup] a try. So once I got a clear head, I thought, 'I might as well.' It was on my 26th birthday. I went to the [now defunct] Laffs on the Landing.

Did it go well?

You know what? I would say the first eight or nine times I did standup, it was pretty good. Especially the first time, because half of my co-workers came. So I had the built-in fan base there.

Did you struggle after that?

No - usually how it works is, you do okay the first time, because [the emcee] will tell everyone it's your first time. So you'll get a little bit of leeway. And normally, you can get people [you know] to come.

But if it's your second time on stage, it might as well be your ten-thousandth.  [The emcee] is not gonna say anything. You probably won't have people there. And you're probably trying new stuff.

When I started, I was writing a LOT. I probably wrote five new minutes for ten straight weeks. I thought I was doing well. But I'm sure if I got the reaction now that I was getting back then, I wouldn't think I was doing well.

On stage, you've talked about a motor tic that you have off-stage that causes you to nod your head a lot.

Yeah, I have one bit on it. But it's kind of weird, because when I'm on stage I never do it. And it's something I don't want to draw that much attention to.

Is it something you've had since you were a kid?

Yeah, since I was six months old. If I did it all the time - like if it was a lisp or something - I'd have tons of jokes on it. But it's not really that relatable, because nobody else does it.

Do you consider yourself a feature act yet?

No, not yet. To me, being a feature means getting regular work at actual comedy clubs. I mean, I've opened for headliners, and done 25 minutes in front of headliners. But that was in the Ozarks. I'd like to be a legit feature. Right now, I'm just an emcee. I have enough to be a feature. But it hasn't happened. Yet.