City Leaders Hope to Pass Parks Bond Proposal Before Holiday Recess... Or Else 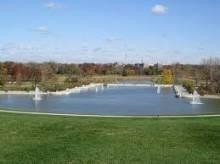 On Friday the Board of Aldermen advanced bills that would lock in current funding and send an additional $64 million in city bonds to St. Louis parks. City Leaders hope the bill will get final passage before the holiday recess, which begins December 9th. The timing is important.

Once approved, the bonds would open the door for a $100 million fundraising campaign for Forest Park-- $43 million of which has already been locked in, including $25 million from a secret donor. But that $25 million is predicated upon the city passing the bond proposal before the end of 2011.

The proposal to use millions of city dollars to maintain and upgrade city parks had ignited fiery debate for a few days. At the previous Board of Alderman meeting, Comptroller Darlene Green made a rare speaking appearance to rebuke the proposal, arguing that the bills were fiscally irresponsible in the current economic downturn. Thirteenth Ward Alderman Fred Wessels also spoke out against the proposal, because it would end up decreasing the current funding for the park in his ward.

But at Friday's meeting, the Board Bill's #189 and 190 passed a procedural step on a virtually unanimous voice vote.

"This is one of those few days when we can really make a difference," said 17th Ward Alderman Joe Roddy, who added that one day he and his colleagues can tell their children and grandchildren about the time they channeled heavy funding into the city's parks.

Perhaps the best sign for the proposal's chances? Twenty-fourth Ward Alderman Scott Ogilvie spoke in support of the bills.

Ogilvie, you see, is often the first-- and sometimes only-- alderman to stand up against any bill that he thinks might be an even slight misuse of city funds. On several floor debates during Ogilvie's six or so months in office, while the majority of the board would describe how a tax abatement for some developer or company will create jobs and make St. Louis more economically competitive and business friendly, Ogilvie would argue that the money spent on a tax abatement for some developer or company should really be going to, say, public schools. He was one of the loudest opponents of the Del Taco Saucer tax abatement proposal, for example.

Anyway, Ogilvie talked about how much Forest Park has improved over the last few years, telling an anecdote of when he first moved to St. Louis in the '90s and his friend told him to avoid biking at Forest Park after dark.

"A lot of that credit should go to Forest Park Forever," he said, of the non-profit organization in charge of maintaining the city's flagship park. "I have no idea how to raise $128 million for a park, but I'm glad someone else does and is doing it."

The only twinge of vocal dissent came from 19th Ward Alderwoman Marlene Davis, who voiced concern over the city's relationship with Forest Park Forever, which would get $30 million of that bond money (the other $34 million would be divvied up among the city's other 106 parks). The organization, which is behind the fundraising campaign, led the park's 2003 renovation. While the city would still make all final decisions about park issues under the new proposal, Forest Park Forever would have more of an input.

"I don't want this park to become a private park," she said. "I'm excited about the Forest Park Forever process. I'm grateful for it. But at the end of the day, when we talk about a public park with all this private input and conditions, I'm worried about it. I see how this can get out of hand."

Before the Board can vote on final passage, the proposal must go through the Board of Estimates and Appropriations, which is made up of Mayor Francis Slay, Board of Aldermen President Lewis Reed and Comptroller Green. The gang met just last week, so they will need to schedule a special meeting sometime soon. The proposal will almost certainly get the two votes necessary to pass out of committee, as Slay and Reed have firmly and publicly gotten behind it.

The bills could reach a floor vote by December 2nd, which is the date of next General Assembly, but Roddy anticipates that December 9th is a safer bet, because of the wait for committee approval. He also mentioned the possibility of Reed calling special session in the event the bills aren't passed before recess, given the urgency of the circumstances.