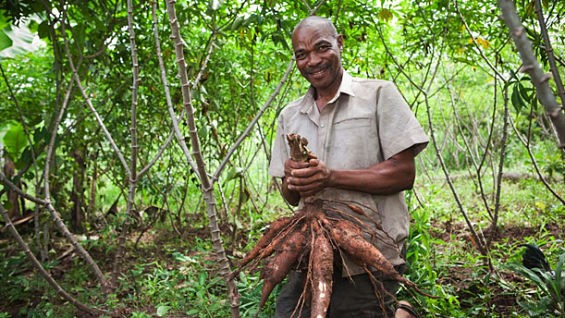 If there were an easy way to end starvation around the world, somebody would have thought of it by now. Obviously. But there are still one billion people worldwide suffering from chronic malnutrition and another billion who don't get enough to eat between harvests. Three-quarters of the poorest people in the world are farmers who grow their own crops. Most of them don't grow enough to sustain themselves and their families, let alone enough to sell at the market.

The Donald Danforth Plant Science Center has teamed up with the Bill and Melinda Gates Foundation to figure out a way to solve this seemingly-insurmountable problem.

Wednesday night Kathy Kahn, a representative from the Gates Foundation, and Paul Anderson, the director of the Danforth Center's international programs office, held a public "conversation" at the Center to explain their plans, which could, conceivably, lead to world peace. Explained Anderson: "Hunger and poverty are the major causes of insurrection around the world."

(The Gates Foundation is also working on preventing school dropouts. Let's add to their list finding a way to keep Windows computers from crashing constantly, since it seems like they're up for attempting the impossible.)

The main goal of the project is crop improvement, which Anderson defined as "improving yields by removing impediments and environmental and fiscal stresses." (Well, this guy is a scientist.)

Added Kahn, "If we can decrease the risks farmers face, both viruses and diseases, we can help farmers maintain their harvest and generate a steady income."

The average crop yield on a farm in sub-Saharan Africa is one ton per acre. The average yield in the U.S., by contrast, is seven tons. Kahn said she believes it is possible to even up the disparity. But she also added that she is an incurable optimist.

Another obstacle: 40 percent of crops spoil before anybody gets a chance to eat them. In the U.S., this is due to wastefulness. In poorer countries, mostly in sub-Saharan Africa, this is because the food isn't stored properly, making it vulnerable to infestation by mold or bugs or getting eaten by rats. The Gates Foundation has attempted to solve this problem by giving the farmers enormous, reusable, airtight plastic bags that can hold 100 pounds of grain. This seems to be helping.

But the first part of the problem, how to grow better crops, isn't quite so easily solved. That's where the Danforth Center comes in, since they're experts in plants. The idea is to create better, more resistant crops. But through cross-breeding, not excessive use of biotechnology: This is the Danforth Center, remember, not Monsanto. And farmers in Africa, Kahn notes, are just as resistant to GMO's as Americans. "If we can improve crops by classical breeding," said Anderson, "we're going to do it."

Many of the farmers, Anderson noted, tend not to have much variety in their diets. The average person in Uganda, for instance, eats two pounds of bananas per day, which is great for potassium, but not much else. "If you're eating the same thing all the time, that leads to malnutrition," he explained. "No food has all the nutrients you need."

The researchers are trying to increase the variety of nutrients in various staple crops. Last year the Gates Foundation gave the Danforth Center an $8.3 million grant to improve cassava, Anderson's specialty. "Vitamin A is definitely the biggest problem," he said. "But iron and zinc are problems, too."

All of this effort will be worthless, of course, unless the researchers can actually get the plants into the hands of the farmers. To that end, they've recruited young scientists from Uganda, Kenya and Tanzania to come to St. Louis for training before returning to their home countries to distribute the new crops to the farmers and teach them new farming methods. They're also trying to work with the governments of various countries in Africa and Southeast Asia.

Whether all this will show any results remain to be seen. But Kahn was hopeful. She showed the audience a photo of a Tanzanian cassava farmer named Christina (who, to the delight of most people in the room, was sporting a Cardinals T-shirt) along with a Tanzanian scientist who had trained at the Danforth Center and both Bill and Melinda Gates.

"The advances in science can lead to new possibilities," she said. "We can deliver better crops to deliver to the farmers. The farmers are part of the solution."