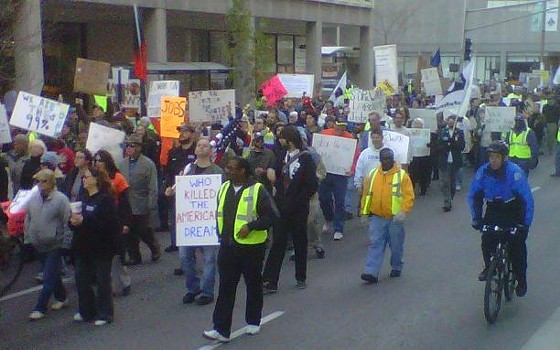 If city officials thought that last weekend's forced eviction of Occupy St. Louis' tent encampment from Kiener Plaza would spell the end of the movement, they were mistaken. Yesterday nearly 1,000 Occupy supporters marched from Kiener Plaza to the foot of the Martin Luther King Bridge.
Police arrested fourteen Occupiers for "demonstrating" when they sat on the roadway leading to the bridge and refused to budge. Those arrested were transported to the St. Louis Justice Center where some 37 other Occupy sympathizers have been booked since the beginning of the movement on October 1.

Yesterday's march to the MLK bridge was Occupy St. Louis' second-largest demonstration to date and came as Occupy movements across the nation marched on "landmark bridges" to celebrate the two-month anniversary of the Occupy Wall Street protest. Hundreds of union members helped swell the ranks of Thursday's protest that also highlighted area joblessness.

Representatives from more than a dozen unions showed up for the event, including highly visible Service Employees International Union members, some of whom donned florescent green work vests and served as "marshals" to shepherd the chanting crowd through the downtown streets. Others included American Postal Workers, United Autoworkers, Teamsters, as well as steel workers, carpenters, painters, teachers, and black trade workers.

​In a display of the signature symbol of their movement, four Occupiers carried a tent on their shoulders in the middle of the crowd. The march was large enough to snarl downtown traffic as two news helicopters circled overhead. The arrests at the MLK Bridge were not spontaneous, but had been planned in advance. In what may be a sign of increasing organization for the "leaderless" Occupy movement, two training sessions on civil disobedience were held Tuesday and Wednesday to walk participants though the arrest process.
Fred Raines, 78, a retired Washington University economics professor, attended one of those training sessions.
"This has all been coordinated," Raines said in Kiener Plaza yesterday as the Occupiers returned from the bridge. "The march was very energetic, very peaceful, and had tremendous enthusiasm. Those designated to be arrested sat down at the entrance to the bridge, blocking eastbound traffic. There were 40 to 50 police. It went very quickly, the police went from right to left, telling them to get up, and handcuffing them."
In similar demonstrations elsewhere yesterday police arrested 300 Occupiers in New York, more than two dozen in Los Angeles, 18 in Dallas, and others in Philadelphia and Minneapolis.
At around 5 p.m. yesterday Occupy sympathizers struck again when they unfurled a large "Occupy Everything" banner from the roof of the vacant Municipal Courts Building on Market Street west of City Hall. Not long after that, the popular Internet meme "WIN" began appearing as posts on the Occupy St. Louis Facebook page.