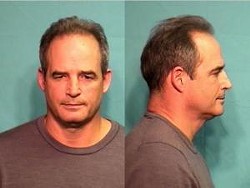 University of Missouri.
Major Tom Reddin of the Boone County Sheriff's Department tells Daily RFT this morning that deputies arrested Pinkel last night on suspicion of driving while intoxicated. According to Reddin, the deputies pulled over Pinkel in his Chevrolet Avalanche around 10:15 p.m. Wednesday for signal and lane violations along Keene Avenue near Broadway in Columbia.
Reddin says deputies had probable cause to believe that the coach was under the influence of alcohol and took him into custody. He would not comment as to whether Pinkel failed a breathalyzer or a field sobriety test.

"We are not commenting on the evidentiary handling of the case," said Reddin. "We have forwarded that information to the prosecuting attorney's office."
Reddin adds that the DUI arrest is the first time he knows that Pinkel has been arrested for drunk driving. Pinkel was released to his attorney at 12:03 a.m. after posting $500 bond.