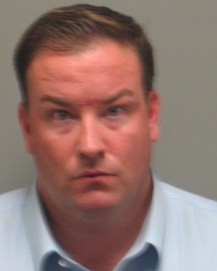 Cardinals broadcaster Dan McLaughlin was too drunk to open the door to his SUV when arrested for a DWI September 25 -- his second such charge in just over a year.

According to the police report for the most recent DWI, McLaughlin didn't have his driver's license on him when he swerved into the curb, plowed down two road signs and struck another vehicle near the Chesterfield intersection of Clarkson and Baxter roads. He handed the police officer his passport, instead, and asked if he could just drive home, saying he just lived just up the road. His SUV had two flat tires, and -- in fact -- he lives miles away.

The officer, meanwhile, noted that McLaughlin reeked of alcohol and asked that he step outside of the car. McLaughlin tried to unlock the car door three times and then became frustrated when he could not, even trying to pull on the handle outside the car. Eventually, the cop opened the door and McLaughlin "stumbled out." The broadcaster had difficulty standing upright, according to the police report, and had to hold onto his vehicle.

McLaughlin was handcuffed then and there and driven back to the Chesterfield police department, where he refused to partake in a breathalyzer or field sobriety test. He asked to call his attorney brother, Kevin McLaughlin. The police report states McLaughlin was unable to dial the number himself. An officer had to do it for him.

Embarrassingly drunk? Yes. Though to his credit, at least McLaughlin didn't piss his pants this time.

Our favorite West County rabble-rouser, John Hoffmann, has more on McLaughlin's second DUI as well as the terms of his most guilty plea, in an article he penned for Chesterfield Patch this week. Suffice to say, McLaughlin will now have a tougher time getting behind the wheel drunk. Not only has he lost his license, he must complete an outpatient treatment program, perform community service, attend Alcoholics Anonymous and use an breathalyzer ignition switch when he eventually gets back behind the wheel.