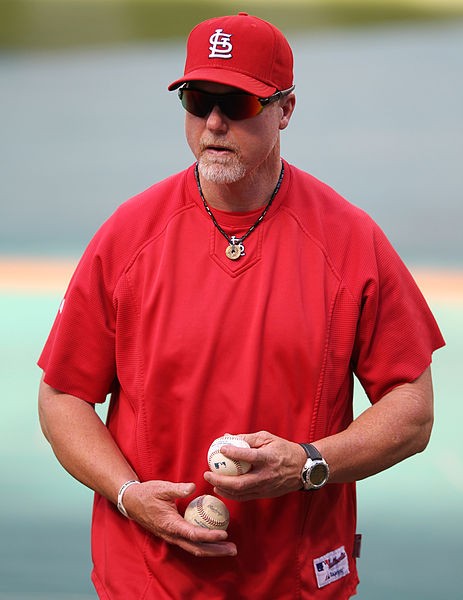 The Cardinals announced their full coaching staff for next season yesterday, putting to paper the group who will support Mike Matheny as he takes over the managerial reigns for the first time. There were a couple of surprises, but for the most part the staff will remain largely intact from what it was in 2011.
As I've said before, I think a fairly big part of Matheny's appeal to the organization was the fact most of his relationships are within the Cardinal family, meaning he was less likely to want to overhaul the rest of the coaching staff and bring in all his own guys the way you usually see when a new manager takes over. Matheny himself will have a different approach than Tony La Russa, but the intact staff means much of the philosophy already in place will be preserved.
La Russa may have driven me and many others to distraction at times with certain aspects of his approach, but this is a team coming off a World Series title. A complete philosophical overhaul is in no way necessary.
The two notable departures are first base coach Dave McKay, who had been a member of La Russa's staff since the mid-80s, and bench coach Joe Pettini, part of the major league staff since 2002. Interestingly, both men are apparently going to stay on as coaches in some capacity within the organization. Pettini came from the player development wing before taking over as bench coach, and McKay has a reputation for helping outfielder hone their craft; I'm assuming both men will likely work in some sort of special assistant/roving instructor type role.
It's not overly surprising to see either man reassigned; both had been in their respective positions for a long time and I'm sure the organization was looking for chances to bring in some new blood and promote from within. I do know McKay has had significant back issues as well over the last few years; perhaps a position not on the field every day was thought to be best for his health.
A quick rundown of the coaches who will be part of the staff when the 2012 season rolls around, beginning with the returning members:
Jose Oquendo, Third Base -- Oquendo stays on in the capacity he's filled for the past fourteen years, and I think that's a good thing. Oquendo has a reputation for working well with infielders on their defense and has a good rapport with many of the current players. He's also the only native Spanish speaker on the staff, which may not be a huge thing but I do like to see. Seeing Oquendo return after being passed over for the manager's spot is interesting; I like seeing it, but it seems a little awkward all the same.
Derek Lilliquist, Bullpen -- Remember back when everyone was up in arms over the Cardinals apparently forcing out Marty Mason? Yeah, neither do I. On the other hand, there was a rather embarrassing episode not too long ago, something about bullpen phones and the right relievers not being up...
Dave Duncan, Pitching Coach -- Duncan most definitely gets more credit than he deserves a lot of the time (groundballs look a whole lot smarter when fielders catch them), but that doesn't mean he isn't one of the best at his job.
Mark McGwire, Hitting Coach -- This was one I was concerned about, as there wasn't much talk about Big Mac in the immediate days after the announcement of Matheny as manager. I love McGwire's approach, and while the players are obviously the biggest part of the equation, I think he played a not-insignificant part in the Cards' league-leading offensive success last year.
And the new additions:
Chris Maloney, First Base -- Definitely one of those situations I mentioned earlier, in which the Cards were looking to promote some new blood onto the big league staff from within. Maloney -- aka The Hammer -- has been the manager of the Cards' Triple A Memphis club the past five seasons and interviewed for the managerial job.
Maloney has been in the Cardinal organization since 1991 with a brief hiatus from 2002-04 (he managed in the Houston system), entirely on the minor league side of things. He's paid his dues, and is getting his first shot in the majors. I would imagine Maloney can probably work a stopwatch and throw batting practice, so he's plenty qualified for the position.
Mike Aldrete, Bench Coach -- This is the really interesting one for me. Aldrete was promoted from assistant to the hitting coach, and most of the scuttlebutt seems to suggest Aldrete was very close to accepting a position with the Oakland organization before being promoted. This seems like a good use of a coaching promotion to me if the Cardinals really think Aldrete is the sort of individual they would miss if he were to leave. I would imagine he'll continue serving as the left-handed counterpart to Big Mac as well, working with the Cards' lefty hitters on their swings.
All in all, it seems like a pretty solid group to me. It's really tough to analyze what impact a first base coach has, though, so I'm not going to try and make any sweeping statements about the brilliance of promoting Chris Maloney or that sort of thing. That's not a knock on Maloney or me making fun of first base coaches; I just don't know how much you can really tell about the job a guy does in that position from outside.
What I do care about is seeing Matheny and the Cardinals keep both Duncan and McGwire in place. As the philosophical leaders on their respective sides of the ball, both have had what I believe to be major positive impacts on the club. Mike Matheny will be heading into the 2012 season with no managerial experience whatsoever, but by keeping the two most important figures on the staff in place he won't have to fly blind.