Appeals Court Goes Inside the Toolkit of a Burlgar 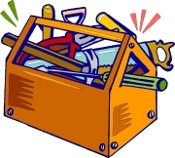 As the saying goes, a good carpenter never blames his tools. But in the case of Brad Mills, who apparently arrives to the job very well prepared, the blame for his legal troubles can be placed squarely on his toolkit.

Earlier this week the Eastern District of the Missouri Court of Appeals ruled that a defendant who dodges a charge of burglary can still be convicted for the possession of burglar's tools -- even if there is no hard evidence that the tools were physically in the defendant's hand.

The court affirmed a 2010 St. Louis circuit court decision that defendant Mills should be found culpable for a burglary after police officers discovered him squatting in front of a bathroom sink with copper sticking out of it, surrounded by a stockpile of tools. And my, what a stockpile it was.

At 6 a.m. on March 19 last year, two St. Louis cops received a dispatch call reporting a burglary in progress in an apartment at 7850 North Broadway, in the Baden neighborhood of north St. Louis. When the officers arrived on the scene they noticed pry marks on the lock area of the front door and heard thumping noises inside.

When the cops opened the door they soon spotted Mills squatting in the bathroom, facing a sink with copper piping sticking out of a large hole underneath it.

Though Mills's hands were physically empty, the floor was strewn with a hammer, crowbar and backpack containing pliers, a box cutter, wire cutters, a flathead screwdriver, flashlight, gloves and a leveler.

This is the kind of professional we want fixing our pipes.

The apartment was owned and maintained by the St. Louis Development Corporation, and when the case went to trial, the corporation's managers weren't actually sure who the rightful resident of the property was. Mills contended that because the state could not prove he didn't live there, he should be acquitted of all burglary-related charges. And his argument, it turned out, was partially valid; in the end, he avoided the charge of burglary.

But you learn something new every day. The appeals court noted that a defendant needn't be found guilty of burglary in order to be guilty of possession of burglar's tools, which is a Class D felony. Mills' argument that the tools could have been used for purposes other than burglary did not convince the judges.

"A jury could easily infer from the thumping noises and where the tools were located that Mills himself was using them just before the Officers entered," wrote Judge Gary Gaertner Jr. in the unanimous opinion on behalf of the three-member appeals panel.

The judges affirmed the trial court's ruling: Although "it was not clearly established as to whether or not [Mills] was granted permission to be inside," the jury could "certainly infer from the evidence that [Mills] did, in fact, pry open the door and enter forcibly"; and thus "was in possession of tools with the purpose to commit an unlawful forcible entry."