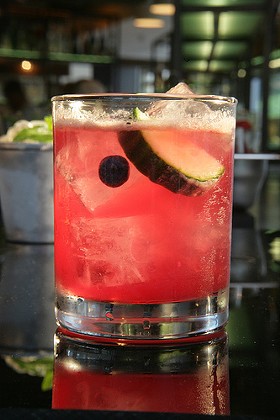 A new study out of Washington University Medical School shows that women with a family history of breast cancer have a greater risk of developing the disease themselves the more they drink. That's right: Not only do you have to get felt up regularly by a cold metal machine, you have to stop drinking, too.

These findings were based on a study by Dr. Graham A. Colditz, an epidemiologist. Over the course of eleven years, starting in 1996, he and his team surveyed 9,000 girls in 50 states about the state of their health. The girls, who were between nine and fifteen years old when the study began, regularly answered questions about various factors that the doctors believed were related to breast cancer: their family medical histories; their own height, weight, waist circumference and path through puberty; and their alcohol intake.

Finally, in a follow-up survey at the end of the study, the doctors asked the participants whether they had been diagnosed with either breast cancer or what they called "benign breast disease": benign lumps that can, eventually, lead to full-blown cancer.

Over the past few years, the researchers have been sorting through their accumulated data. They discovered that girls with a history of breast disease in their families were twice as likely to develop breast disease themselves. They also found some more surprising correlations:

"Increasing height is related to breast cancer risk," Colditz explained in a press release. "And some data point to faster growth spurts leading to a higher risk of subsequent cancer."

Then they looked at the alcohol factor. As Colditz put it, "We're seeing the strongest effect of alcohol in women with breast disease in the family."

Turns out girls with breast disease in the family increased their risk of developing the disease themselves the more alcohol they consumed. And worse news: They didn't have to drink a lot. The doctors saw an increase in breast cancer among women who had as few as three to six drinks per week.

Naturally, the researchers hope they can build on this research and identify patients at risk for breast cancer much earlier on, like before they develop lumps.

"The most common question we hear from women with a family history of breast disease is how can we prevent breast cancer in our daughters," said Colditz. "This points to a strategy to lower risk -- or avoid increasing risk -- by limiting alcohol intake."

You can read the full study in yesterday's online edition of the journal Cancer.