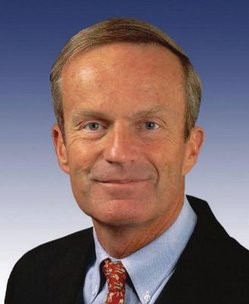 There was a bit of confusion late last week over whether U.S. Congressman/GOP Golden Boy Paul Ryan officially endorsed Congressman Todd Akin in his campaign to unseat Senator Claire McCaskill.

"Todd Akin has been a great asset to the House Budget Committee. His principled approach to fiscal responsibility is exactly the kind of leadership America needs and I appreciate his hard work."

An Akin staffer Tweeted that Akin announced an endorsement from Ryan. Several news outlets reported that Ryan had endorsed Akin.

It looked like an endorsement and it smelled like an endorsement, but Ryan was not officially endorsing Akin. This became clear within a few hours. A spokesman for Ryan told Politico that Ryan, who is chairman of the House Budget Committee, was simply "applauding Congressman Akin's work on the House Budget Committee and praising his commitment to fiscal responsibility. There's no endorsement of Akin's candidacy referenced so not sure where that's coming from."

In the days since, Akin's opponents in the Senate race and liberal blogs have accused him of misleading the public about the Ryan's (non) endorsement; of consciously presenting it as an endorsement.

John Hancock, senior advisor to John Brunner, one of Akin's opponents in the primary, said in an email to Politico: "We will never attempt to mislead members of the media by claiming endorsements that do not exist."

Much of the confusion arose because the news release mentioned three GOP leaders who support Akin. Two of those leaders, Congressmen Pete Sessions and Jim Jordan, actually have officially endorsed Akin. In the last paragraph, the release quotes Akin: "I am honored to have worked with Reps. Ryan, Sessions, and Jordan as we fought these battles in the House." Considering that Ryan's quote is prominently stationed at the top of the release and that no distinction is made between Ryan's support and Session's and Jordan's endorsements, it is easy to see how one might think that Ryan was also endorsing Akin.

Ryan, after all, has emerged as a young star in the GOP. His budget proposal in April 2009 helped articulate and set the tone for the Republican agenda over the next two years. Until recently, many in the party were calling for him to enter the 2012 presidential race. An endorsement from Ryan would be a massive boost for Akin who has struggled to find sturdy footing in this high-profile race.

But confusion shifted into blunder when Akin's political director Rachel Hassani Tweeted that "@Todd Akin just announced endorsements from @RepPaulRyan and @PeteSessions on @MarkReardonKMOX show!" The Tweets were soon deleted, but the left-leaning blog Fired Up! Missouri captured and posted the screenshots.

Here was the Akin campaign's defense to Politico's David Catanese:

Akin campaign manager Karl Hansen attempted to split the difference, saying Ryan's statement represented "an endorsement of Akin's principled record" while Sessions and Jordan "clearly endorse not only Akin's record, but his candidacy for U.S. Senate, as well."

"The fumbling of a non-endorsement by Paul Ryan is emblematic of a larger problem plaguing Todd Akin's Senate campaign: It's not yet ready for prime time," he wrote, before concluding, "Akin's campaign team is either not acting in good faith or inept -- either of which will darken his chances at capturing the GOP nomination next August."

The Paul Ryan endorsement controversy probably wasn't even the worse news to hit Akin's camp in the last week. On Thursday, the latest Rasmussen poll was released. Sarah Steelman, another of Akin's Republican opponents, held a two point lead over incumbent McCaskill. Akin, a six-term congressman who has been widely considered the favorite in the primary, trailed McCaskill by two points. Both races are within the survey's margin of error, though, effectively making them dead heats.