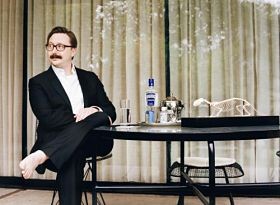 The Christmas season starts the very second Halloween ends. Which explains why, even though there's barely a nip in the air, already there are two Christmas-themed books on the bestseller list: I Am Half-Sick of Shadows, the latest entry in Alan Bradley's series about eleven-year-old sleuth Flavia de Luce, and Curious About Christmas, a Curious George board book for people who are only still curious about Christmas because they haven't had to experience it yet.

Fortunately, there are antidotes: Blue Nights, Joan Didion's book-length meditation on the death of her daughter Quintana Roo (yeah, very cheerful), which makes its debut on the local bestseller list at number two, and That is All, the third and final entry in John Hodgman's trilogy of Complete World Knowledge, mostly made up by Hodgman himself. St. Louisans got to experience Hodgman's wisdom in person when he came to the Mad Art Gallery November 3, a guest of Subterranean Books.

Also new to the list, The Cardinals of Cooperstown by Greg Marecek and Myron Holtzman of the St. Louis Sports Hall of Fame, which, after the heroics of the World Series, is well on its way to being obsolete.

1. That is All by John Hodgman 2. Blue Nights by Joan Didion 3. Steve Jobs by Walter Isaacson 4. The Litigators by John Grisham 5. Go the Fuck to Sleep by Adam Mansbach and Ricardo Cortés 6. 1Q84 by Haruki Murakami 7. Amazing Adventures of a Nobody by Leon Logothetis 8. Tony Duquette/Hutton Wilkinson Jewelry by Hutton Wilkinson, Stephanie Hanchett and Glenda Bailey 9. The Cardinals of Cooperstown by Greg Marecek and Myron Holtzman 10. I Am Half-Sick of Shadows: A Flavia de Luce Novel by Alan Bradley

1. The Hunger Games by Suzanne Collins 2. Percy Jackson and the Olympians, Book 1: The Lightning Thief by Rick Riordan 3. Heroes of Olympus, Book 2: Son of Neptune by Rick Riordan 4. Press Here by Hervé Tullet 5. The 39 Clues: Cahills vs. Vespers, Book 1: The Medusa Plot by Gordon Korman 6. Mastiff by Tamora Pierce 7 . Curious Baby Curious George: Curious About Christmas by H.A. Rey 8. Emako Blue by Brenda Woods 9. Once in a Full Moon by Ellen Schreiber 10. Spongebob Squarepants: Attack of the Zombies! by Alex Harvey and Harry Moore