Marlins Make Their Move for Albert 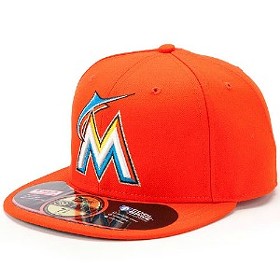 Albert Pujols was in Miami yesterday, meeting with the Florida/Miami/Dade County Marlins. The newly christened Miami team is making a heavy push in the free agent market, in an attempt to drum up interest as they move into their new stadium home for the 2012 season.
Want to know how hard the Marlins are pushing in said free agent market? Well, apparently they made a contract offer to Pujols while he was in town, the first team known to have done so. (Aside from the offer or offers the Cardinals made back before the season, that is.) No one has yet leaked details of the contract offered, but the mere fact an offer was floated at all sends a clear message to the rest of the league that the Miami Marlins are going to be serious players for serious players, payroll concerns be damned.
Bringing in Albert would make all the sense in the world for the Marlins, giving them a centerpiece player to build around, both from a production and marketing standpoint. Pujols' Latin heritage is attractive to the Marlins as well, as having a Latino superstar on the team would offer even more appeal in a city with a large Hispanic population.
In addition to Pujols, the Marlins also floated offers to free agents Mark Buerhle and Jose Reyes, putting themselves in contention for three of the, say, seven biggest names in free agency. It's a bizarre situation, really, to see the Marlins actually going out and trying to spend money, after years of being one of those teams other franchises complain about, as in the ones who collected more revenue-sharing dollars than they spent in total.
Don't let their history fool you, though. The Marlins absolutely can afford to go out and spend in a big way this offseason, largely because of that history. They're essentially the baseball version of that old man you see in line at the bank wearing double-knit polyester from 1983 depositing a jar of change.
Sure, he's unfashionable (as are the new-look Marlins), and sure, he's eaten exactly three meals in an actual restaurant since he got back from Korea. But you know what? That old man is driving a brand new Cadillac he paid for with 35 years of nickels, while the rest of us were busy eating out, buying clothes not made in occupied Japan, and giving free agent contracts to Kyle Lohse.
So how serious a chance does Miami have at landing Albert? Well, considering the rather limited number of teams with both the need and the financial ability to bring in a big-time free agent at first base, I honestly think the Marlins could be the biggest threat to his continued residence in St. Louis. The Cubs don't look likely to go the big-money route, at least not yet. I'll believe the Angels are going to sign a free agent when they actually do so, rather than just being rumoured every offseason. The Dodgers' ownership situation is still up in the air, and the Mets are currently trying to figure out a way to avoid being put in a nursing home after losing all their savings.
San Francisco and Texas are the other two suitors I think have a legitimate shot at landing Pujols. The Giants seem to have their eye on Prince Fielder, but I have a feeling they would consider Albert Pujols a pretty good consolation prize. Right behind those two clubs is where I would put the Marlins. In other words, I wouldn't say they have the best chance of landing a Pujols or a Reyes, but they're also not just putting on a show when they bring in the big free agents for a visit anymore.