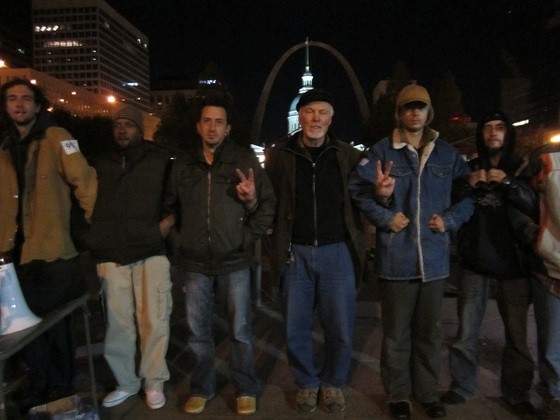 For a moment last night, members of Occupy St. Louis had hope. Attorneys representing the protesters were meeting late into the evening with Federal District Court Judge Carol Jackson, arguing that the group be allowed to continue its 42-day encampment in Kiener Plaza despite Mayor Francis Slay's order for it to end come 10 p.m.
By 8:30 p.m. roughly 50 hard-line Occupiers marched to the Thomas F. Eagleton Courthouse, using megaphones to make their presence known. Would it be effective? Maybe. Maybe not. But it was better than sitting around waiting for the authorities to come to them.

All day long the people holding their ground in Kiener Plaza were abuzz in anticipation of police coming in to enforce the park's 10 p.m. curfew. By late afternoon yesterday the number of Occupiers downtown had grown to well over 200 people. Television camera crews crawled through the crowd, tourists passing in horse-drawn carriages snapped pictures, a half-dozen patrons of Gio's Ristorante stood across 7th Street, heckling the group with right-wing catcalls.

As the sun set and temperatures dropped last night, the crowd thinned to half its earlier size only to rebound with fresh troops as the curfew approached. Then it happened. The clock struck 10 p.m. and ... nothing. Still no word from the lawyers and the judge and no forced removal at the hands of the police.

A half hour passed. Then another. And another. Now just around 75 hard-line Occupiers remained. Gone were the homeless who had set up camp alongside the Occupiers and swelled their ranks in recent weeks. Gone, too, were half of the 50 or so tents that blanketed the downtown mall the night before. Finally, right before midnight, the lawyers returned. The judge denied their injunction.

Thirty minutes later, roughly a dozen police vans rolled in, blocking 7th and Market Streets, and unloading an estimated 65 officers, many carrying plastic handcuffs, though none in riot gear. Lieutenant Dan Zarrick gave Occupy St. Louis fifteen minutes to vacate the plaza as two dozen Occupiers, determined to be arrested, linked arms at the top of the plaza steps.
"Let's go," Zarrick told his officers when the time elapsed, pushing through an angry gauntlet of protestors hurling vulgarities at the cops.

Less than twenty minutes later, just before 1 a.m., the police action concluded peacefully with 27 voluntary arrests. One arrested Occupier chained himself to a chair and had to be cut free. In the night's tensest moment, which drew silence from everyone, an Occupier had a seizure and had to be taken away in an ambulance.

With Kiener Plaza free of protesters, city workers drove a dump truck from the Forestry Division onto the scene and began filling it with piles of sleeping bags, tents and left-over provisions. Just like that, Occupy St. Louis was hauled away -- at least for the time being.