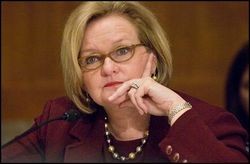 The race for the GOP U.S. Senate nomination in Missouri runs around a thin, muddy track. There isn't much elbow rooms for the candidates, three self-described conservative Republicans with no significant differences in policy positions so far. Consequently, every distinguishing factor is heightened

As campaign season warms up, each candidate has adjusted their message and tactics, in search of their most effective niche in the conservative cluster. And with nine months to go before the primary election for the right to challenge Democrat senator Claire McCaskill in one of the most high profile congressional races in the country, there are enough doldrums ahead for voters and media to dig through and stretch out the peripheral matters that separate the candidates. So all three have worked to shape the narrative to fit their niche.

Todd Akin is the battle-tested conservative warrior. Sarah Steelman is the anti-establishment scrapper with unconventional ideas to knock Washington into sensibility. John Brunner is the veteran Job Creator who has never been tainted by the muck of political experience.

The most recent major poll, which Public Policy Polling conducted in mid-September, showed Steelman as a slight frontrunner in the primary, and just one point behind McCaskill. To maintain that status, though, she'll need to pick up her fundraising efforts. In the third quarter she raised $96,000 and loaned her campaign $400,000 out-of-pocket. By contrast, Akin raised $280,000 and McCaskill raised $1.2 million in the third quarter.

But Steelman has compensated with a heavy dose of campaign gimmicks. In August she started an online petition called "For a Clean Super Committee," which demanded that the twelve members of Congress who formed the debt-reduction Super Committee refuse to take donations from lobbyists and political action committees. In October, she challenged Akin and Brunner to a series of debates, which neither accepted. So Steelman sent out a press release saying she would show up to the "debate" alone, if necessary. And earlier this month, Steelman unveiled "Sarah's Commitment," a new pledge in which she promises to cut her Senate salary and budget by fifteen percent, to serve for no more than twelve years, and to push to end pensions for politicians.

Steelman is trying to hold down that "Voice of the Middle Class" spot. Her experience as an elected official is minor enough to let her still play the Outsider role, which is particularly valuable in today's political climate. Especially considering her opponents are a veteran politician and a wealthy businessman-- neither of which is too popular these days.

Akin, meanwhile, must feel like the guy who's followed a band since they were doing afternoon sets in empty bars and now can't get tickets to their show at Radio City Music Hall because it sold out in four minutes. He calls himself a "principled conservative" and his opponents "party conservative." Bandwagon fans!

Todd Akin was a red meat conservative before it was in fashion, back when President Bush was outlining goals to fight climate change, and Massachusetts governor Mitt Romney was clamoring for the shut down of a coal plant because he "will not create jobs that kill people," and Wisconsin congressman Paul Ryan was voting to pass TARP.

But then he questions whether Medicare is constitutional and says things like "at the heart of liberalism really is a hatred for God." Stuff like that takes a toll on a candidate's perceived electability.

So with both Akin and Steelman shaky on that front, Brunner has sought to capitalize by framing himself as the reasonable and palatable Republican, and his opponents as fringe right-wingers who might drive too many moderate voters to McCaskill.

"If we don't win in November, we're going to be in deep trouble," Brunner told the crowd. "The real issue is we've got to get the best person in who can win."

It is telling of the times that a candidate who has never before run for political office is willing to push this narrative so forcefully. It can be doubly damaging to set yourself up as the "serious candidate" if your fundamentals aren't on point. Which is what Kansas City Star columnist Steve Kraske concluded when he met Brunner last month.

"Brunner's not ready," he wrote. "Not even close. In an interview, he couldn't articulate a clear vision or expand on even basic questions, such as on creating jobs. Mr. Brunner, you need some more practice. Either that, or try it again some other year."

But there is still plenty of time to brush up on the issues. So far Brunner has focused on improving his name recognition. In the September poll, 74 percent of Missouri voters answered "not sure" when asked if they held a favorable or unfavorable opinion of Brunner, fifteen to twenty percent higher than for each of his opponents.

He has enough money to close this gap quickly. Because of his late entry into the race, he was the only candidate who didn't release a campaign finance report for the third quarter. Regardless, many assume that Brunner, a former owner and CEO of the health care product company Vi-Jon Inc., will reach into his pocket as deeply as necessary.

Over the last month or so, Brunner has released two campaign ads. He is the only one in the field running TV spots so far.

To help the public visualize him as the incumbent's chief foe, Brunner goes right after McCaskill. The first ad, which his campaign released in early October, shows a picture of McCaskill standing behind President Obama with the words "Regulations" and "Spending Debt" at the top of the screen. It weaves in footage of Brunner walking through the Vi-Jon factory and wearing a helmet and glasses while inspecting a hand sanitizer bottle, which may or may not be in the job description of the "Chairman Emeritus," the honorary position he now holds.

The second ad, released in early November, is more direct. Brunner, in a neck tie, casually leans against an office table, looking friendly as he says, "America is lacking leadership, and Claire McCaskill's a big part of the problem." Then he goes on to talk about his experience as a Job Creator.

Unfortunate timing for him, then, that Vi-Jon laid off an undisclosed number of employees less than a week before this commercial aired. His campaign, of course, blamed the business's struggles on Washington and, Brunner's chief advisor John Hancock told the St. Louis Beacon, "the longterm effects of overregulation, high taxes and out-of-control spending."

Of course, median income is being taxed at the lowest rate since 1916 and the top income bracket paid a higher rate during the boom years of the '90s; and since January 2009, spending cuts at every level have cost half a million public sector jobs; and the longterm effects of underregulation fueled America's worst economic collapse in 80 years.

Certainly any of these candidates could really distinguish themselves from the pack by acknowledging any of these facts.