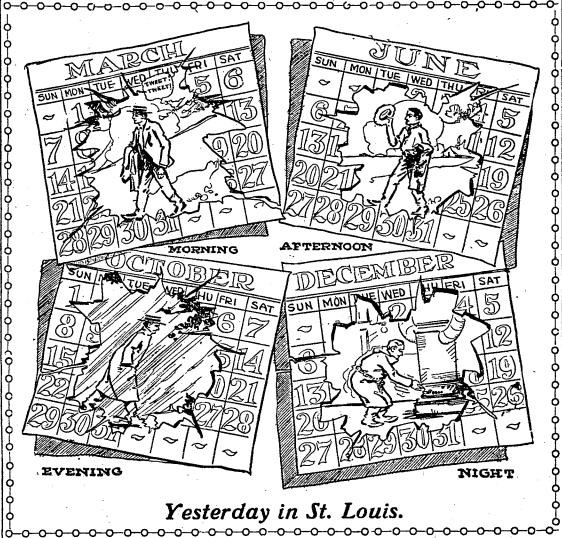 Yes, friends, it is that mystical day, the eleventh day of the eleventh month of the eleventh year of the century. (Technically, only the tenth, but whatever.) Several among you took to the Twitters to note the eleventh minute of the eleventh hour. The more historic-minded reminded us that today is the anniversary of the end of the War that Was Supposed to End All Wars, which has since morphed into a day to honor all the men and women who served our country during the wars that followed. For a small subset of you, it is a day of celebration: The 111111 Grandest Meeting of the Corduroy Appreciation Club.

All of these things are worth honoring. But Daily RFT wants to take you back to the last 11/11/11, November 11, 1911, when Missouri experienced one of the biggest temperature drops in recorded American weather history.

At 2 p.m. that day, just before the cold front swept in, it was 78 degrees in St. Louis and 82 in Columbia, a record high for that day. By 7 p.m., most of the state reported freezing temperatures. Some areas reported 30-degree temperature drops in the span of 10 minutes. 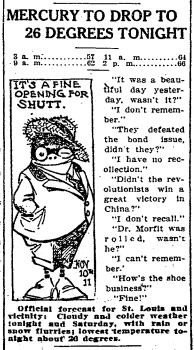 On November 12, St. Louis posted a temperature of 18 degrees, while in Columbia it was 13, another record. A weather observer at Saint Louis University reported that one St. Louisan died from the heat on the eleventh, while another froze to death the following day.

If that wasn't bad enough, the cold front blew in with thunderstorms and hail, which turned into sleet and snow, piling up as deep as two inches in some areas. Reported one observer: "Church steeple in St. Charles was blown down, several homes unroofed, and trees broken off. One windmill twisted off in county about 2 1/2 miles west of St. Charles."

"On the 11th dandelions were blooming and yellow butterflies fluttering about," lamented the SLU observer.

Then, as the Post-Dispatch reported (somewhat dramatically) the next day: "The the soft orchestral symphony of the wind swelled into a trumpet blast and the lamb was transformed into a lion."

Apropos of Nothing History