Wash. U. Researchers May Have Discovered First Step in Preventing Cerebral Palsy

Five years ago, a group of researchers at Washington University Medical School discovered that elevated levels of an enzyme called Nmnat1 could prevent nerve damage. This got Philip Verghese, a postdoctoral research associate in Dr. David Holtzman's neurology lab thinking. Could Nmnat1 prevent damage in brain cells as well?

Verghese was thinking in particular of cerebral palsy. "Cerebral palsy is sometimes attributable to brain injury that stems from inadequate oxygen and blood flow to the brain before, during and soon after birth," says Verghese. If this goes on long enough, the brain cells start to die through a process called necrosis, where they swell and explode. The damage is permanent, and it can affect movement, vision, cogitation and communication. So far, there is no cure. But what if doctors could prevent the damage from the very beginning?

(For more about living with cerebral palsy, check out Annie Zaleski's feature "Step Right Up.")

In their experiment, Verghese and his colleagues used two groups of mice: one "normal" group and another group that had been genetically-altered to produce higher levels of Nmnat1.

"We gave an acute injury to the brain," he recounts, "trying to recapture what's happening to these children." 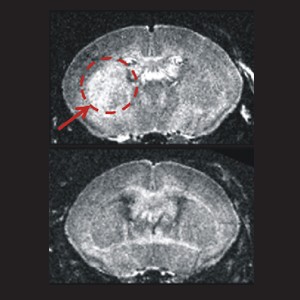 Six hours later, the researchers examined the brains of the mice using an MRI scan. "In the first group," says Verghese, "we saw a huge change in the brain. There was a huge disturbance. But in mice that overexpressed the enzyme -- that produced more of it -- we did not see any change at all. They were completely protected."

After a week, the mice showed signs of injury. The damage, though, was significantly less than it was in the mice with regular levels of Nmnat1. "We think, at this point, that the enzyme blocks the early, early disturbances that can lead to cell death," Verghese concludes.

It's an exciting breakthrough, but Verghese warns that it's only the first step in preventing cerebral palsy in newborn humans. "It's naive to say it can be easily translated," he says. "We need to find a drug or a chemical model that can activate the enzyme in the brain to give more protection."

The next step, he says, is to examine individual cells in the lab and figure out how, exactly, to get them to produce more Nmnat1. The researchers also want to see if increased levels of Nmnat1 are helpful in preventing degenerative neurological diseases, such as Alzheimer's and Parkinkson's.

"If we can find a way to increase the level in a clinical setting," Verghese says, "it could be pretty promising. It's a very interesting observation at this point. We'd definitely like to move forward and understand more about developing potential drugs."

The research appears in the Proceedings of the National Academy of Sciences.