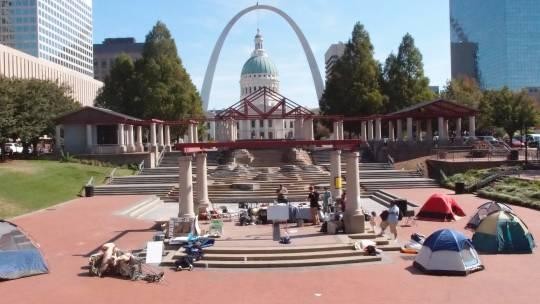 Forty or so OccupySTL protesters and a handful of reporters stood outside the Broadway Central entrance of the Edward Jones Dome, in the rain, waiting for someone to open the doors. They could see security guards and people in suits on the other side. The press people with big cameras had already been allowed in, to set up. This all frustrated a few of the protesters.

"If we're not allowed to live stream this," said a twenty-something man wearing rubber toe-glove shoes, "I say we get the hell out!"

"It means they're trying to hide something," said an older man with a Santa Claus beard.

The man in the toe shoes moved to the edge of the sidewalk and gathered the group in a large circle.

"Who has an issue with what's going on right now and what is your issue?" he said loudly.

There was a pause for a few seconds. Heads looking around.

"Can you be more specific?" someone in the circle finally said.

A girl in a blue fleece then spoke up.

"Hey, I'm not gonna go in because I object to the whole thing right now," she said.

She continued on, but a voice somewhere behind the circle interrupted, "Hey they're letting us all in."

As the Occupiers marched in, single file, Jeff Rainford, Mayor Francis Slay's chief of staff, met them at the door, beaming with his right arm out-stretched, shaking every single hand.

The protesters and a half dozen city officials packed into the Richard A. Gephardt Organized Labor Education Room and the two sides talked for more than two hours. They conducted the meeting in the Socratic style the Occupy movement has famously used for their General Assembly, complete with the hand signals and a facilitator. The city wanted the Occupiers to end their overnight encampment at Kierner Plaza. The Occupiers wanted the city to let them stay.

While no specific compromise emerged, the discussion was civil and both sides declared their desire to work with the other, hoping to set a new precedent in the nearly three-months-old Occupy Wall Street movement. The protesters showed a willingness to consider alternative campgrounds. The city assured that the Occupiers would get 24 hours notice before any eviction action took place.

The mayor's office has treated OccupySTL with kid gloves. Slay has openly stated his support for, or at least tolerance of, the movement. The police department has been respectful and helpful. Since the single flurry of arrests a month ago, the city has ignored the relevant ordinances and let the protesters stay at the park. It seems the mayor is conscious of avoiding the kind of antagonistic relationship with the Occupiers that has caused waves in so many other cities around the country. Slay does not want to end up like Oakland mayor Jean Quan, a progressive former Berkley activist for minorities, labor unions, and poor people who has mutated into "an object of Occupy Oakland's scorn."

Such a sentiment was obvious from the start of the meeting. While the protesters shot out of the corner swinging, the city officials projected an empathetic tone.

A young protester named Chuck immediately declared that he would refuse to participate in the meeting unless Rainford apologized for "threats or insinuations of violence against us and the accusation that we are inciting violence," which he interpreted when Rainford told the Post-Dispatch on Monday, "All I'm trying to do is to keep this from becoming Oakland. I'm trying to get this solved with no violence."

Rainford condemned the police actions in Oakland and asserted that he never threatened violence.

Other protesters snatched the opportunity to articulate their ideological positions on banks, democracy, campaign finance reform and homeless facilities. Often, they appeared to direct their frustration over the country's problems toward Rainford and the other city officials, who  essentially served as proxies for The Establishment.

In return, Rainford and company continuously stressed that they understood the protesters' frustrations, appreciated many of their points, and wanted to work with them as much as possible to come to a compromise. But, Rainford said, they were obligated to start applying city laws.

The primary purpose of the meeting was an attempted negotiation over the protesters' use of Kiener Plaza, a reflection of the ongoing tension between Occupiers and city officials across America. Last week, Slay wrote a blog post on his website that said that the city has been receiving complaints about the protesters' encampment at the square. He vaguely noted that the city would begin to enforce its ordinances and regulations, two of which-- park curfew and a prohibition of unapproved structures-- the protesters have been allowed to break for the past few weeks.

This negotiation evolved into a metaphysical exploration of the symbolism behind the act of occupation in the Occupy movement. After the city officials told the protesters that they could occupy the plaza as much as they want between 6 a.m. and 10 p.m., a few of the protesters explained that the physical camp ground is designed to convey their dedication to enacting change; that it is important that a guy driving past at even 3 a.m. sees the tents, remembers the message.

"How much space do you need to occupy?" asked Rainford. "Could you occupy a relatively small part?"

Mary Ellen Ponder, a Slay staffer, presented the idea of a "speaker's corner"-- like the one in Hyde Park in London-- which the protesters could use 24/7.

The protesters countered that they have 52 tents and that the size of the encampment helps grab attention and advance the cause.

"If we're not going to get out there," said one protester, "you wouldn't be listening to us."

This didn't leave much room for compromise. The parties earnestly attempted to brainstorm potential alternatives to Kierner Plaza. But all were fleeting. The space under the Arch is federal ground, so the city lacks jurisdiction. One protester suggested using one of the many vacant LRA-owned buildings and an official suggested using a labor union building, but neither idea spurred further discussion. Another protester brought up the possibility of repealing the ordinances through legal channels, by going through the Board of Aldermen or a judge. This didn't catch on either.

Rather than propose a new location, most of the protesters worked to convince the officials that the city should let them stay where they are, citing First Amendment rights, as well as the order they've maintained at the park even through the World Series and a visit from President Obama. But this line of reasoning didn't alter the city's position that the Kiener Plaza tent community must go... eventually.

Rainford gave no specific date for when the city would forcibly evict the protesters. This, he said, would only happen once "one side feels that negotiations have broken down." The negotiations, though, remain ongoing.

The only real vitriol of the afternoon bloomed during a fifteen minute break. In the lobby outside the meeting room, three Occupiers and two middle age women, who had also been in attendance, debated the merits of the movement.

"How is it fair for you guys to be using First Amendment rights for free when every other group has to pay for a permit?" said one of the women, who wore a red coat.

An Occupier shot back something about constitutional rights and the fundamental flaws of our economic and political system. But this didn't move the women.

"Would you like it if I walked into your house and pooped on your floor?!" said the other woman, who wore a white sweater.

A crowd gathered around the spectacle. The woman in the white sweater grew increasingly boisterous, proclaiming that the Occupiers are breaking the law and wasting tax dollars.

"The city residents are paying for your electricity!" she said, eyes bulging. "Why are you getting preferential treatment?"

The break ended, but most of the folks in the crowd didn't move, spellbound by this blatant opportunity to convert a non-believer. One protester, though, wary of the inflammatory tone of the argument, sought to shepherd the pack back into the meeting.

"Everybody walk away from her," he said. "She's confrontational. She doesn't deserve a response. Turn your backs."

All but a few went back into the room and the meeting continued. Every now and then the officials and protesters had to raise their voices because the shouting outside kept pouring through the open door.

"What are you doing!?" screamed the woman in the white sweater. "You're not changing anything! Tell me one thing you guys have changed! Has this gotten anyone a job? Oh, no it hasn't! It's making people lose jobs!"

Then the security guard at the back of the room closed the door, and the meeting could proceed in peace.