Declare Your Love For Mizzou -- On Your Ass 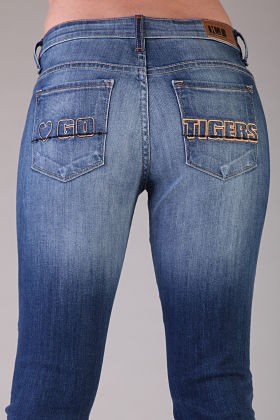 If the eighties taught us anything, it was that there's no better place to show off a fancy logo than your ass. And for most people, there is no fancier logo to flaunt than that of their dear, dear alma mater.

Greg Adams is like most people. During his college years at Texas Christian University, he amassed an extensive wardrobe of purple-and-gold TCU shirts. Alas, he had no bottoms to wear with them, except for sweatpants with TCU emblazoned across the ass. Which, as Adams notes now, you can't exactly wear when you go out at night, or even to games. Well, if you are a person of taste and style.

So in the fall of 2009, during his last semester of college, Adams teamed up with a Tyler Fleming, a classmate who happened to be a graphic designer, and started up Original College Jeans (OCJ) Apparel, a company that produces classy-looking jeans with collegiate logos embroidered on the rear pockets. They are currently available at six universities, including Mizzou, in two washes ("Deep Indigo" and "Victory") and two cuts (skinny and bootcut).

Sadly, he cannot wear any of OCJ Apparel's products. So far, they're all for women.

"In the premium denim market, women are the biggest customers," Adams explains. He believes his jeans, manufactured to his specifications in LA, are equal to any designer jeans. "People see college jeans and assume they're cheap, but we've spent a lot of time making sure our jeans are good enough to stand on their own." As well they should: People have certain expectations when they're asked to pay $127 for a pair of jeans.

The first batches of OCJ jeans went on sale this fall. In addition to Mizzou, they're available for Texas Christian, Southern Methodist University, Oklahoma State University, and the Universities of Kansas and Wisconsin, and sold in off-campus boutiques. (In Columbia, that would be Elly's Couture.) The selection of universities was based, in part on geographical proximity and family connections (Adams' sister goes to Kansas) and also on which schools would give OCJ licenses to use their logos.

"Big schools like Texas and Michigan and Notre Dame don't grant licenses to first-year companies," says Adams. "They have high college apparel sales and are moving so much volume, they can be picky about who they choose to give licenses to." But aren't Kansas and Missouri big schools, too? "Kansas isn't packing the same numbers into the stadium as Texas and Michigan," Adams explains. He does add, however, that since the OSU Cowboys has been doing so well on the field, OSU jeans sales have been picking up as well.

OCJ is a small company: Its best-seller is TCU, but it's only sold 100 pairs of TCU jeans so far. Startup costs were high, not just because of the quality of the jeans, but also because Adams had to pay licensing fees. All financing came from private loans from friends and family members. Still, Adams says, the company has been hitting all its sales goals. Next year, he plans to expand to 20 or 25 schools; in preparation, OCJ is about to hire a third full-time employee to handle inventory and move its headquarters to a bigger space. They'll also start applying for licenses to make men's jeans.

You know, because men should get to display love on their asses, too.