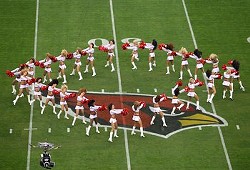 Hallelujah, the Rams won a game!
Oh, and now they have to go out and try to win another one this weekend as they begin divisional play for the 2011 season with a trip out into the Arizona desert. It seems odd to say this about a 1-6 team, but this week is a big game for the Rams. The division is almost certainly out of reach, and the playoffs are too in all likelihood, but for the development of this team, what they do from this point on will say a lot about who they are in the future.

The Rams do have some momentum, as they beat one of the NFC's better teams last week and have to be encouraged. Another win and that might very well turn into real belief. Arizona, on the other hand, is coming off a heart-wrenching loss last week to Baltimore -- though they could take some solace in playing the Ravens very tough -- and have a quarterback injury to contend with. (Actually, both teams have a QB injury to worry over, but at least the Rams' backup led them to victory last week.) They've lost six games in a row since opening the season with a win against Carolina.
So two teams with identical 1-6 records. One team won their first game last week, one team is heading downward fast. Not exactly a clash of the titans, but a game the Rams sorely need to win all the same.
Key #1: Take Advantage of John Skelton
The Cardinals will be starting their backup quarterback this week, one John Skelton. The Rams saw Skelton briefly last season, when they defeated Arizona 19-6 in early December, a game which really put the final nail in the coffin of Derek Anderson.
Skelton has yet to start a game in 2011, after starting four in his rookie season. Last year he completed less than 50% of his passes, had a 2/2 touchdown to interception ratio, was sacked 9 times, losing 65 yards in the process, and fumbled the ball three times. In other words, John Skelton has some talent, but he's also very young, quite raw, and exactly the sort of weakness a good team should be able to exploit.
The responsibility for doing so will largely fall on the Rams' defensive line, specifically the ends. Chris Long enjoyed a career day last week against the Saints, and Robert Quinn was named Special Teams Player of the Week for his blocked punt. Quinn also recorded a sack and three quarterback hits in his most complete performance yet in an NFL game. James Hall is still the starter, but Quinn is showing more and more each week why he was the Rams' first-round pick in April.
The Rams have an opportunity with the Cardinals being forced to play their backup quarterback this week, and have one of the most talented groups of pass-rushers in the league to take advantage of that opportunity. That group could have an enormous impact on the game by showing up in a big way.
Key #2: Darnell Dockett and Adrian Wilson
The Arizona defense overall has had its ups and downs this season, but the Cardinals do boast a few truly elite defensive talents. Most prominent among those are Adrian Wilson, the Pro-Bowl safety, and Darnell Dockett, the defensive lineman who has moved to the five technique in Arizona's newish 3-4 defense.
Wilson has certainly slowed down some from his mid-2000s peak, when he was a one-man wrecking crew. (Which was good, since he so often seemed to be playing alone for the Cardinals in those years.) However, his pass defense has actually improved as he's gotten older, and he can function in either safety role with approximately equal skill. Anything thrown over the middle of the field falls into Wilson's jurisdiction, and requires a little extra caution.
For my money, Dockett is the most dangerous member of the Arizona defense. You don't often see 3-4 defensive ends with his ability to get across the line of scrimmage and disrupt an offense's game, and he'll be playing against a Rams' O-line which has been appallingly inconsistent in 2011. The offensive linemen need to step up in a big way to protect A.J. Feeley and keep him upright and able to run the offense.
Key #3: Beware of Patrick Peterson
Patrick Peterson is the Cardinals' stunningly talented young cornerback, but his biggest impact so far has been made on special teams, where his rare combination of speed and size has made him a dynamic kick returner.
The Rams have done an outstanding job the last couple seasons on kick coverage after wandering in the wilderness of poor special teams play for years. Still, Peterson is exactly the sort of dangerous kick returner who can change a game with just one play. It will fall on the Rams' coverage team to prevent that from happening.
Neither of these teams have been at all good this season, but there's at least some reason for optimism on the Rams' side. Arizona is going nowhere fast, and presents exactly the sort of opportunity the Rams need to take advantage of if they want to have any hope of salvaging the 2011 season.